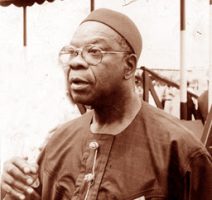 Evan Enwerem: The Remarkable Life of A National Icon

Today, Nigeria will be celebrating The Life and Times of Evan Enwerem in a book written by Jimmy Imo, title MATURE – The Remarkable Life of MATURE(Evan Enwerem). History is one of the most important subjects you get to study at school, and no better place can it be learnt except through books are written about the Life of Icons who have shaped that history.

In that Class, Evan Enwerem belonged, Nigeria’s first Senate President in the Fourth Republic – Nigeria as a country must study its past and the lives of its leaders in order to change her future. To quote Winston Churchill: “A nation that forgets its past has no future”.

Evan Enwerem (October 29, 1935 – August 2, 2007) was a Nigerian politician who served as President of the Nigerian Senate in 1999. He was a member of the People’s Democratic Party.

Evan Enwerem was born in Ikeduru, Imo State, Nigeria, on October 29, 1935. He obtained his bachelor’s degree from the University of Southampton in the United Kingdom.

Evan Enwerem served as chairman of the Nigerian Airports Authority NAA between 1980 and 1983. He was elected governor of Imo State in 1991 during the failed Third Republic era of the Nigerian government.

Evan Enwerem was elected to the Nigerian Senate in 1999 to represent the Imo-East Senatorial Zone. He became the first president of the Nigerian Senate during Nigeria’s Fourth Republic. Enwerem beat his chief rival, Senator Chuba Okadigbo, for the Senate presidency on June 3, 1999. Former Nigerian President Olusegun Obasanjo backed Enwerem for President of the Senate against Okadigbo. With the support of the Obasanjo’s allies in the governing parties, plus support from two Nigerian opposition parties, Enwerem easily defeated Okadigbo with 66 votes to Okadigbo’s 43 votes.

Evan Enwerem died the morning on 2 August 2007, at the National Hospital in Abuja at the age of 73. He is survived by his wife Vivienne Enwerem, and seven children.