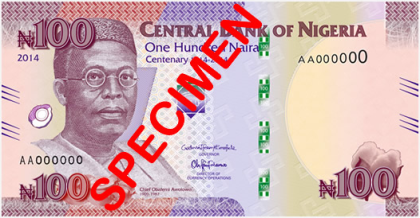 The commemorative banknote has been designed and produced with the most advanced and security technology features with strong resistance to counterfeiting. It is meant to be durable, attractive and reflect Nigeria’s collective heritage and memory as a united nation. The new banknote retains the portrait of the late sage, Chief Obafemi Awolowo on the front and raised embossed line to assist visually impaired persons in recognizing the face value.

The back side incorporates Quick Recognition Code (QRC) window, which encrypts significant information that highlight Nigeria’s 100-year journey, thereby making it one of the best smart-connected paper banknote using smartphones as identity and security tool for de-encryption of information.

In a brief remark at the event, the Governor, Central Bank of Nigeria, Mr. Godwin Emefiele, CON, stated that Central Banks across the globe issue new banknotes mainly to replace or occasionally, to commemorate epochal events. He noted that the new N100 banknote unveiled today is for the second reason—to commemorate our 100 years as a single united nation.

Meanwhile, the new banknote will be issued to the public at a later date in December 2014.