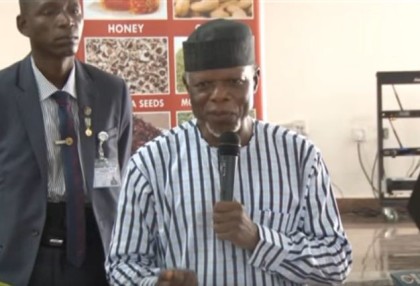 The Comptroller-General of Nigerian Customs, Col. Hameed Ali (Rtd) on Monday denies sacking of 400 officers in the ongoing restructuring of the service as being speculated.

He said, “I am not aware of any sacking; you are just telling me; I don’t know.”

Ali said that the essence of his visit to some stakeholders was to create a common platform that would drive the mandate and enable the service to achieve its set goals by the Federal Government.

He emphasized the need for Nigeria to focus more on export than import, adding that importing goods and services will not grow Nigeria as a nation.

Ali said there was need to review policies so as to focus on how to regenerate exportation.

Comptroller-General noted that 99 per cent of NCS business was clearing of imports.

“ We are doing restructuring; I have mandate given to me by Mr President to reform, structure and to raise revenues.

“And in the course of restructuring, a lot of things will have to happen and the visit is one of them,’’ Ali said.

Ali visited the Bureau of Public Procurement (BPP) where he called on the organization to assist the customs to enable it build its capacity and train officers to handle procurement matters based on the Established Act.

“We are here because procurement is one area that needs no mistake; I can afford to make mistake in some areas but there are two areas that I dare not make mistake, accounting and procurement.

Eze said that the essence of the course was to train the procurement officers to be well established as professionals.

He advised the service to always recruit applicants with some qualification on procurement so that they can grow on the line.

Eze added that this would help the service to build a better department to handle its procurement activities.

The BPP Chief Executive presented a legal framework guiding the operations of public expenditure in Nigeria to the comptroller general of customs as a tool to enhance the service in the area of procurement.