Money For Arms: All Stolen Funds Will Be Recovered – Magu 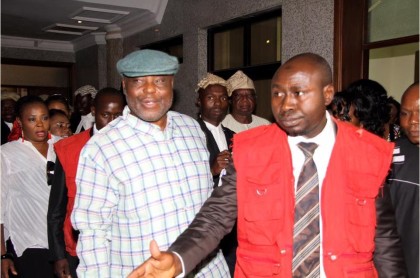 Acting Chairman of Economic and Financial Crimes Commission, EFCC, Ibrahim Magu, has said that the Commission will leave no stone unturned in the effort to recover public funds that have been stolen in the guise of arms procurement in Nigeria.

Magu, added that all the culprits in the arms procurement scandal would be brought to justice. He also said the Commission had resolved to break the corruption chain in a fair, accountable and transparent manner, also stated that the Commission had so far investigated a total of 1,881 cases within 2015 alone.

The Acting Chairman also said “Out of this figure, 280 cases were filed in courts and 78 convictions were secured. In this period also, eight interim and two final forfeiture orders were handed down by various courts on applications brought by the Commission”.

He, therefore, urged civil service organizations as well as other partners to join hands with the Commission in the anti-corruption fight.

Earlier, the Secretary-General of the United Nations, Ban Ki-Moon, said corruption had disastrous impacts on development when funds meant for social amenities were diverted by public office holders for their personal use.

Ban Ki-moon, who was represented on the occasion, added that corruption could exacerbate violence and insecurity.

The Director-General of the Bureau of Public Service Reforms, BPSR, Dr. Joe Abah, called for the enhancement of the Code of Conduct Bureau, CCB.

He further stated that the newly introduced zero- based budgeting would ensure discipline in the implementation of budgets.