#DasukiGate:  Metuh Remanded in Kuje Prison Till Tuesday When His Bail Application Would Be Considered 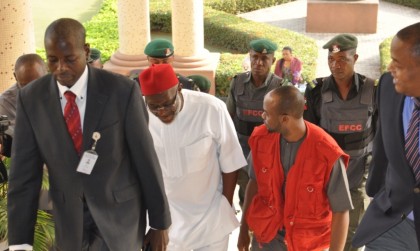 Spokesperson of the Peoples Democratic Party, Olisa Metuh is to remain in Kuje prison till Tuesday, January 19, when his bail application would be considered. The embattled spokesperson and his company, Destra Investments
Limited, were today docked by the Economic and Financial Crimes Commission, EFCC, before Justice O.E Abang of the Federal High Court sitting inAbuja on a 7-count charge bordering on money laundering, anoffence punishable under the Money Laundering (Prohibition) Act 2012(as amended).
Metuh is alleged to have received N400m (Four hundredmillion naira) from former National Security Adviser (NSA), Col SamboDasuki (rtd) from funds meant for arms procurement.
One of the counts reads:“That you, Olisa Metuh and Destra Investments Limited on or before the24th November, 2014 in Abuja within the Jurisdiction of thisHonourable court took possession of the sum N400,000,000 (Four HundredMillion Naira) only, paid into the account of DESTRA INVESTMENTSLIMITED with DIAMOND BANK Plc account number: 0040437573 from the account of the National Security Adviser  with the Central Bank of Nigeriawithout contract award when you reasonably ought to have known thatthe said sum formed part of the proceeds of an unlawful activity ofCol. Mohammed Sambo Dasuki (rtd), the then National Security Adviser(to wit; criminal breach of trust and corruption) and therebycommitted an offence contrary to Section 15(2), (d) of the MoneyLaundering (Prohibition) Act, 2011 as amended in 2012 and punishableunder Section 15(3) of the same Act”.
He pleaded not guilty when the charges were read to him.
Prosecuting counsel, Sylvanus Tahir, thereafter urged the court to fixa date for the commencement of trial. He also prayed the court toorder the accused to be remanded in prison custody pending thetrial.
Counsel to the defence, Onyechi Ikpeazu, SAN, however, prayed thecourt to discountenance the application of the prosecution statingthat it is “illegal and unconstitutional” to remand the defendant inprison.
“We apply for the court to admit the defendant to bail on liberalterms and we rest our application on section 158 of the Administrationof Criminal Justice Act 2015,” Ikpeazu argued.
While opposing the motion for bail, Tahir noted that “the defence hasnot filed a written bail application”.
Responding, Ikpeazu, said that the case was a summary trial and that,the notice for arraignment was filed and served “few hours to thearraignment as opposed to the stipulated 7 days notice” therebygiving them little or no time to prepare a formal application.
“The court can use its discretion to grant the defendant bail,irrespective of whether the application was oral or formal. We refermy Lord to the case of Abiola vs FRN,” he said.
After listening to both counsel, Justice Abang posited that “the factof the case of Abiola vs FRN is different from the fact of this caseand the Administration of Criminal Justice Act 2015 was not enactedwhen the case was decided”.
He consequently, refused the accused bail and ordered the defencecounsel to file and serve the bail application to the prosecutionwithin 5 hours adding that the prosecution should respond within 24hours.
Adjourning the case to January 19, 2016 for the hearing of argumentson the bail application, he ordered that the Metuh be remanded inprison custody.
Wilson Uwujaren
Head, Media & Publicity