Corruption Is Fighting Back, But We Are Winning The War – FG 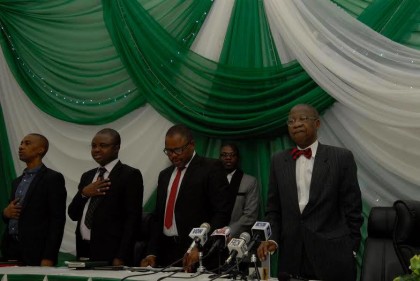 Minister Of Information and Culture At A Function

The Federal Government has said it will neither be distracted nor intimidated into abandoning or weakening the fight against corruption, which it called a war of survival for the nation.

”No amount of media or other attacks will stop the fight. The pseudo-analysts and hack writers will labour in vain in their quest to stop the train of this anti-corruption fight,” the Minister of information and Culture, Alhaji Lai Mohammed, said at a meeting with Abuja Bureau Chiefs on Tuesday.

”When I met with the News and Political Editors in Lagos on Sunday, I said, among other things, that the government is aware that in fighting corruption, corruption will also fight back. I also said that those who stole us dry are powerful. They have newspapers, radio and television stations as well as online platforms, and an army of supporters to continuously deride the government’s war against corruption.

”Well, I can tell you today that corruption is already fighting back, and it is fighting hard and dirty. Sponsored articles have started appearing in the newspapers and in the Social Media, while ‘Talking Heads’ have started making the rounds in the electronic media, all deriding the fight against corruption as well as this Administration.

”Not stopping there, they have been creating distractions by sponsoring articles in both local and international media to deride the Administration’s policies generally, tag the President a budding dictator and even write off his 2016 budget. We know that the sole purpose of these attacks is to distract attention from the war on corruption,” he said.

Alhaji Mohammed said ”it is saddening that some otherwise credible voices have unwittingly allowed themselves to be railroaded into the bandwagon of pro-corruption orchestra”, while noting that some ”hack writers” are struggling to whittle down the impact of the anti-corruption campaign.

”One hack writer even said the disclosure that 55 Nigerians allegedly stole 1.34 trillion Naira between 2006 and 2013 did not trigger any anger among Nigerias! A disclosure that made the front page in over a dozen Nigerian newspapers, played widely in the international media and attracted the attention of the world’s most powerful country and global financial institutions cannot be dismissed with a wave of the hand,” the minister said.

The Minister said even one of those who benefitted from the ‘Dasukigate’ had the temerity to deride the anti-corruption war as ‘selective’, ”when in saner climes, he should have been so ashamed of himself that he would have apologized to the nation and hunkered down for good”.

He said the sponsored attacks are not about to stop, and that they will become more intense and more coordinated in the days ahead, adding: ”But the good news is that we are winning the war. Nigerians are now talking more about corruption. Nigerians are now counting the cost of corruption to their lives.”

He called on Nigerians not to be swayed by the antics of the sponsored denunciation of the anti-graft war, saying ”the treasury looters, who have so much resources in their kitty, and their cohorts will throw everything but the kitchen sink at this Administration. But we have no doubt that Nigerians are discerning enough to know the truth which, in the words of President Muhammadu Buhari, is that unless Nigeria kills corruption, corruption will kill Nigeria.”

He urged the media to continuously educate and inform Nigerians about the evils of corruption, especially the cost of corruption to the lives of the citizens.

”That explains why we lost many soldiers to the fight against Boko Haram, which in turn created many widows and orphans, in addition to pushing millions of Nigerians from their communities into IDP camps. This explains why the war dragged on for years until President Buhari assumed office and, within just seven months, strengthened the capacity of the military to decimate Boko Haram,” the Minister added.