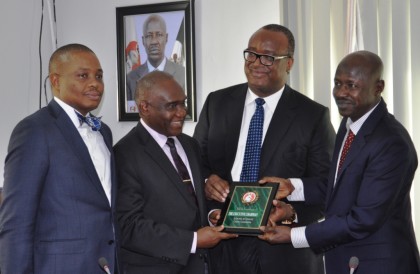 Acting Chairman, Economic and Financial Crimes Commission, EFCC, Ibrahim Magu, has charged members of the Nigerian Bar Association, NBA, to join hands with the Commission to stamp out corruption from the Nigerian society.
He also decried the practice by some members of the NBA who have been aiding some individuals and corporate organizations to perpetrate economic and financial crimes.
Speaking during a courtesy visit by members of the NBA to his office in Abuja on Wednesday, February 10, 2016,  Magu, in his brief remark titled The NBA Must Not Allow Corruption To Kill Nigeria,  said some lawyers had been giving the body a bad name with their unprofessional conducts.
According to him,  ‘‘Society is not served when prominent members of the Bar not only take clearly tainted briefs, but even facilitate the commission of crimes by knowingly supplying the technical know-how and later, helping in the dispersal of the proceeds of crime. There are lawyers within the fold of the NBA who ought not to be among your noble ranks. Those people are not fit to be called ministers; rather, they are vandals of the temple of justice.’
The EFCC boss further stated that the input of lawyers would be needed to successfully wage the war against fraud, corruption and money laundering.
He added: “Law enforcement , just as the judiciary, encompassing the bar and the bench , is a critical link in the justice delivery system of any society.  I dare say that  even when opinions and tactics differ, the interest of the two blocs cannot but converge on the overriding interest of the people.’’
Magu, who stated that no other anti-graft agency in Nigeria had beaten the record of the EFCC in the areas of prosecutions and convictions, further described the ordinary Nigerian as the victim of  money laundering , embezzlement , diversion  of funds and frauds.
He, therefore, urged them to share in the vision of President Muhammau Buhari’s war against corruption, while also congratulating thebody for supporting the EFCC over the years.
Earlier, Augustine Oyarekhua Alegeh, SAN, President, NBA, expressed the reason behind the courtesy visit, saying that it was to salute the courage of Magu in the corruption war.
He also stated that the EFCC and NBA need to work in synergy for the war against corruption to be won. He disclosed that the Bar’s anti-corruption Commission had developed a Know –Your- Customer, KYC, template for lawyers, which will hopefully address concern over members accepting questionable briefs.
Wilson Uwujaren
Head, Media & Publicity