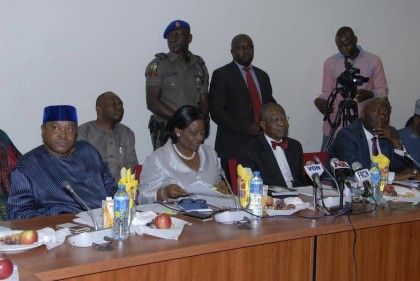 Minister of Information and Culture At #Budget2016 Defence

The Minister of Information and Culture, Alhaji Lai Mohammed, has advocated a special funding arrangement for public media organizations to enable them to scale up their sensitization campaign against insurgency in the North-East.

The Minister made the call on Wednesday at the National Assembly, during an interactive session with members of the Senate Committee on Information and National Orientation, preparatory to the 2016 budget defence.

While responding to the sentiment expressed by a member of the Committee, Senator Ben Murray Bruce, on the effective utilisation of the public media in the fight against insurgency in the North- East, Alhaji Mohammed said his ministry had already mounted a robust public sensitization campaign on the insurgency, with the active participation of the Broadcasting Organisation of Nigeria, but noted that the public media needed to be retooled to enhance its ability to drive the campaign.

“I must say that FRCN, NTA and VON, they have given me their schedules, at times we get as many as 16 slots within an hour to propagate these things. But I must admit that we have constraints. The FRCN in particular does not have the reach it used to have before and this is not surprising because for years, we have neglected the maintenance of the FRCN.

“VON is even worse because when the new station was built about two years ago, we were told that we need about N600 million annually to maintain it but what did we get? N120 million when they give us anything at all. So we have been cannibalizing and trying to make the best out of a bad situation,” he said.

Alhaji Mohammed disclosed that the public media organs were directed to itemize the necessary requirements needed to prosecute the public sensitization campaign against the insurgency in order for the people to take ownership of the war and be security conscious.

“Let NTA, FRCN, VON, if only for the sake of the war in the North-East, tell us what they need to be able to prosecute this war. It’s going to be huge no doubt, but there is no way NTA, FRCN or VON will be able to meet this obligation when we have broken down transmitters and antennas,” he said.

Alhaji Mohammed also stressed the crucial role of the National Orientation Agency (NOA) in the campaign against insurgency and value re-reorientation.

“We see the NOA as a veritable vehicle not just in the war against insurgency but on all the wars against every ill including the war against corruption. We are working on this renewed campaign, which is going to be a much improved campaign on war against indiscipline, which we have tagged “Change Begins With Me”.

”This campaign will address all ills but this time around, we are not just targeting those at the top, they would have to lead by example but it’s going to be a bottom-up kind of campaign,” he said.

In his contribution, the Chairman, Senate Committee on Information and National Orientation, Eyinnaya Abaribe, suggested to the Executive Arm of Government to prepare and present an amended budget to capture all the necessary requirements of the public media organs to ensure success in the sensitization campaign against insurgency.