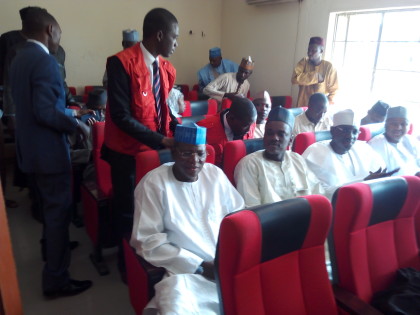 The trial of a former Jigawa governor, Alhaji Sule Lamido alongside his two sons, Aminu and Mustapha, and two others is progressing as documents showing how state funds was siphoned by the accused persons are being presented and admitted as exhibits in court.
Lamido and his accomplices are being prosecuted on a 27-count charge by the Economic and Financial Crimes Commission, EFCC, before Justice Adeniyi Ademola of the Federal High Court sitting in Maitama, Abuja.
Lamido allegedly abused his position as governor between 2007 and 2015 by awarding contracts to companies where he had interest, using his two sons as fronts.
The former governor was equally alleged to have collected kickbacks from contractors in the state, with the funds allegedly paid into accounts that were managed by his sons.
A witness, Joy Isen on Wednesday, February 10, 2016 told the court that she was duty bound to report any suspicious transaction to the Nigerian Financial; intelligence Unit, NFIU.
Isen, a senior marketing manager with Zenith Bank who testified as the 9th prosecution witness, stated this while being led in evidence by counsel to EFCC, Chile Okoroma.
The witness stated that, she was in court to present the account opening packages and statements of account of Dantata and Sawoe Construction Company, Interior Woodworks Limited and Rauda Integrated Services Limited which were admitted in evidence as exhibits EFCC 28a-p, EFCC 29, EFCC 30 and EFCC 31.
Also in the witness box was Kehinde Aberuagba, a compliance officer with Access Bank Plc who testified as PW10.
Aberuagba stated that, his bank was subpoenaed and that he was in court to present the statements of account and account opening packages of Bamaina Nigeria Limited, Dantata and Sawoe Construction Company, Speeds International Limited and two accounts relating to Mustapha Sule Lamido.
Though the admissibility of the document was strongly contested by Lamido’s counsel, Joe Agi, SAN, his objection was overruled by the court and the document was admitted in evidence as exhibits EFCC 33a-f.
On Thursday, February 11, 2016 Aberuagba, in continuation of his evidence, told the court that, Lamido was a signatory to Speeds International Limited.
The witness stated that there was a cash deposit of N10m on the 4th of February 2008 into the account of Bamaina Company Nigeria Limited by Aminu Sule Lamido.
He tendered through the prosecuting counsel, Okoroma, statement of account and account opening packages of Speeds International Limited.
At the resumed hearing of the case today, Okoroma called the eleventh witness, Kabiru Mohammad, an investigator and deputy detective superintendent with the EFCC.
Mohammad stated that, he took four additional statements dated November 16, 2013, December 3, 2013, December 17, 2013 and January 27, 2014 from the second defendant, Aminu Sule Lamido under caution.
The documents were tendered and admitted in evidence as exhibits 45a-d.
Millennium Development Board documents and Ministry of Health and Social Welfare documents were also admitted in evidence as exhibits 46a-f.
The witness told the court that, he went to Dantata and Sawoe Construction Company to investigate if Gada Construction Company, Speeds International Limited and Bamaina Company Nigeria Limited made any supplies of bitumen and cement.
“I was shown a register by Dantata and Sawoe Construction Company from the year 2007 to June 8, 2015, of all the companies that made supplies to them. I was also given a certified copy and none of the aforementioned companies supplied anything”, Mohammad stated.
Thereafter, Justice Ademola adjourned to March 8, 9, 10 and 11, 2016 for continuation of trial.
Wilson Uwujaren
Head, Media & Publicity