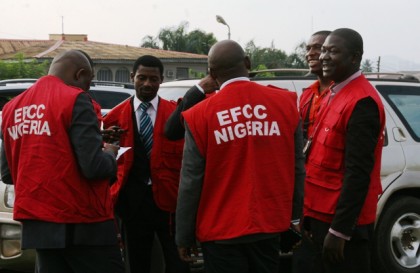 Justice Abdul Kafarati of the Federal High Court sitting in Abuja on Monday, February 15, 2015 upheld the prayers of the Economic and Financial Crimes Commission, EFCC, to prosecute the duo of Bello Esther Olabisi, a director with Sheman Anthill Great Ningo Oil and Gas Refinery of Greater Accra, Ghana and Taibat Atinuke Raheem, a staff of First Bank Plc, for an alleged N4m fraud.

Olabisi had filed a motion before the FCT High Court, Maitama, Abuja, seeking N100m damages against EFCC under the Fundamental Right Procedures Rule for alleged unlawful arrest and detention, unlawful seizure of property and unlawful freezing of account.

This came following a petition received by the Commission on March 26, 1014 from one Okon Offiong, Director, Qua Petroleum Refinery Limited, accusing the applicant of criminal breach of trust, cheating and theft.

The money, according to the petitioner, was meant to be a non-refundable consultancy and legal fee for Sheman Anthill Great Ningo Oil and Gas Refinery of Greater Accra, Ghana, where Olabisi works.

The petitioner further alleged to have transferred the money to Olabisi’s account because it could not be paid in dollars.

Though she assured the petitioner that she would send the financial instrument, otherwise called M7799 proof of fund, a week after receipt of the money, she became elusive.

Olabisi, however, was arrested by operatives of EFCC in a sting operation on September 10, 2014 and granted an administrative bail on the same day.

As a result, she was charged with false pretence and being in possession of forged documents before the Federal High Court, Maitama, Abuja on February 23, 2015 by the EFCC.

However, efforts by the Commission to arraign her have been unsuccessful.

Delivering his ruling yesterday, Justice Kafarati upheld the argument of the respondent counsel, Ibrahim Audu, who had filed a counter- affidavit and a written address, and dismissed the suit filed by Olabisi for lack of merit.

Justice Kafarati also directed Olabisi to make herself available for arraignment by the EFCC, as charges have been preferred against her.

It will be recalled that Olabisi had previously been declared wanted by the Commission.