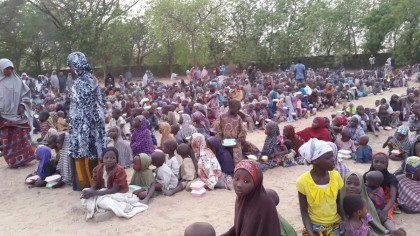 “It is a pathetic situation we have. There are more than two million internally displaced persons, 70 percent of whom are women and children. Of these, 60 percent are orphaned children.

“We are willing to work with organisations such as yours to quickly rehabilitate infrastructure, rebuild schools, medical clinics and destroyed homes,’’ the President said.

President Buhari told the visiting medical charity team that the task of rehabilitating IDPs in the region was enormous, but noted that with perseverance and commensurate resources such challenges are surmountable.

He thanked the Greek doctors for their humanitarian activities in the country and assured that his administration would welcome other spirited individuals and organisations with similar intentions.

The leader of the Greek Medical Charity organisation, Prof. Xenofan Yataganas, told the President that the organisation which commenced humanitarian work in Nigeria since 2002 has been involved in rebuilding schools and distributing medicines and food at IDP camps.