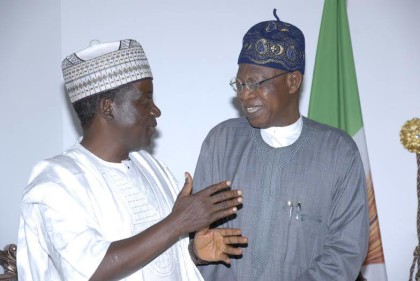 The Plateau State Governor, Mr. Simon Lalong, has pledged the support of his administration for the actualization of the Digital Switch Over (DSO) in broadcasting in the country by June 2017.

Mr. Lalong, who gave the pledge in Jos during a courtesy visit by the Minister of Information and Culture, Alhaji Lai Mohammed, on Friday expressed delight that Plateau State was selected for the pilot scheme.

“We look forward to the pilot take off of this project on the Plateau. I want to assure you that we will do all within our means to support this project and also to help so that Nigerians will have the benefit of this programme,” he said

The Governor said his initial fear when the nation failed to meet the DSO target on two occasions had been allayed by the renewed commitment of this administration to the realization of the project.

“I also count it a blessing to be part of this historic moment. I was looking forward to its realization when it came up this year and I was reading in the newspapers some problems with the issue. I was also on my knees praying that it will not affect the initial exercise but today to God’s glory it is confirmed that it is going to happen,” he said.

He expressed the confidence that with Alhaji Mohammed in the saddle, the digitization project will definitely succeed.

Mr. Lalong also assured that with peace and security as the cardinal policy of his administration, Plateau State would be returned to the path of permanent peace for development and socio-economic activities to thrive.

Earlier, the Minister told the Governor that the Federal Government will flag off the pilot scheme of the digital crossover in Jos in April this year, noting that Plateau State was chosen because of its pioneering role in television broadcasting in the country.

“I must say that Plateau State is a trailblazer in many ways. This is the state where colour television was first premiered, and now it is the same state that is hosting the pilot project of our digital television switch over. Our ability to meet the 2017 deadline depends largely on the success of the pilot project, hence Plateau is key to successfully achieving a digital switch over in Nigeria. I congratulate the Governor and the entire people of the state for shouldering this enormous responsibility,” the Minister said.

Alhaji Mohammed said more jobs will be created with the take-off of the digitization programme and restated the commitment of the Federal Government to meeting the deadline.

”There is no doubt that as they continue to expand their operations, starting from Jos to various locations across the country during the digital switchover of the various cities in Nigeria, new employees will come on board to man their equipment and run their facilities,” he said.

The Minister was in Jos to meet with all stakeholders involved in the DSO and to inspect the transmission facilities preparatory to the launch of the pilot scheme next month.