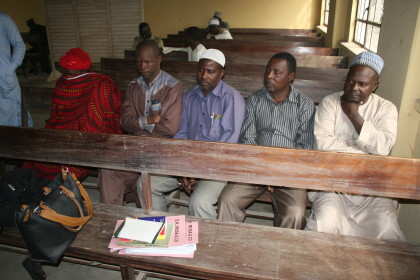 The case was reported to the Commission by one Prof Lawal Khalid, Chief Medical Director of ABUTH, against the management of the Multipurpose Cooperative Society of the Non Academic Staff Union of the institution.

The petitioner alleged that, sometime in 2013, First City Monument Bank, Zaria branch granted N185 million loan to Multipurpose Cooperative Society of NASU ABUTH Zaria and the fund was later disbursed by the society to the beneficiaries for subsequent repayment in full with interest within 24 months. The petitioner added that the Management of ABUTH guaranteed only the deduction from the beneficiaries’ salary for the monthly repayment and remittance to the Society’s account at the Bank which will enable FCMB to recover its money. The petitioner also stated that following complaint of over deduction of repayment by some beneficiaries, an internal investigation was conducted which discovered that N27, 211, 486.66 could not be accounted for.

It was further alleged that, ABUTH Management constituted an Ad-hoc committee on the issue which recommended that the sum of N25, 5387, 798.60 should be recovered from the officials of the society.

The accused were arrested by the EFCC, and investigation later revealed that, the sum of N3, 995, 104.17 was supposed to be repaid on monthly basis by the Management of ABUTH to FCMB, but the accused conspired among them to be remitting N4, 834,076, and converted the difference to their personal use.

Count one of the charge read “That you KABUK DAUDA being the Chairman, NURUDDEEN MOHAMMED being the Secretary, CECELIA JATAU being the Treasurer, ABDULRAZAK GARBA and ABDULKADIR DANYARO of Non Academic Staff Union (NASU) Multipurpose Cooperative Society, Ahmadu Bello University Teaching Hospital Zaria (ABUTH) and Olatunbonsun Thomas (now at large) sometimes between May, 2013 and March 2014 at Zaria within the Judicial Division of the High Court of Kaduna State, while being in the management of the NASU Cooperative society and its Bank account with First City Monument Bank (FCMB) obtained two (2) loan facility of N85, 292, 000.00 (Eighty five million, two hundred and ninety two thousand Naira) and N100, 000, 000.00 (one hundred million Naira) but with intent to defraud, conspired among yourselves to do an illegal act to wit; Criminal Breach of Trust in the disbursement and pricing of the loan by increasing the interest rates in order to gain a monetary advantage to yourselves and cause lost to the beneficiary members and thereby committed an offence contrary to section 96 of the Penal Code Law and punishable under section 97 of the same Law”.

All the accused pleaded not guilty to charges read against them. In view of the above, the prosecution counsel Samuel Chime urged the Court to fix a date for hearing. He also added that, all the witnesses for this trial were ready.

Justice Ladan granted bail at N10 million to each of the accused and two reliable sureties for each in the like sum with landed property within the jurisdiction of the court.