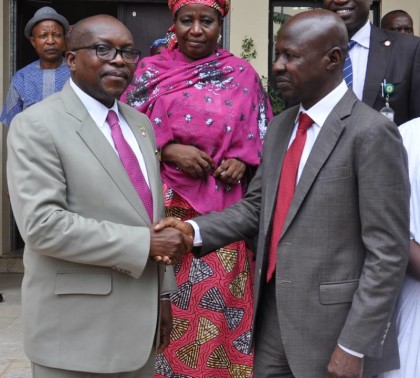 Acting Director of Bureau of Public Enterprises, BPE, Vincent Akpotaire, has sought the support of the Economic and Financial Commission, EFCC, in his bid to remove the clog in the discharge of the Bureau’s statutory duties.

Speaking during a courtesy visit to the Office of the Acting Chairman of EFCC, Ibrahim Magu, at the EFCC Headquarters, on Tuesday, April 12, 2016, he further expressed the need to re-establish and deepen the existing relationship between the BPE and the Commission.

According to him, ‘‘EFCC can continue to partner with the Bureau by seconding its staff to witness and participate in the financial bid openings to limit and reduce human interference in the process. We would like you to provide us a desk officer who will be readily available to observe the transactions run by teams set up by the Bureau.’’

Akpotaire, who said the visit was aimed at enhancing BPE’s core values of transparency, integrity, accountability, commitment and diligence to work, further stated there was a need to entrench a better synergy towards rebuilding the desired trust in the generality of Nigerians.

He said: “There is a lot of distrust in the country today, and we believe that we can have a better synergy that can allow the system to function efficiently and effectively. Besides, we need to rebuild trust that can make the public believe that public officials are working for the interest of Nigerians rather than for personal interests.’’

The BPE boss also proposed occasional workshops, where professionals from both the EFCC and BPE could be holding talks, as part of efforts towards providing solutions to the challenges facing the two bodies.

In his response, Magu reassured the team that the Commission would partner with BPE in the areas of training and workshop. He restated the Commission’s gratitude to the Bureau for assistance rendered to the agency during her formative years.