EFCC Did Not Decorate Ekweremadu As Anti-Corruption Ambassador 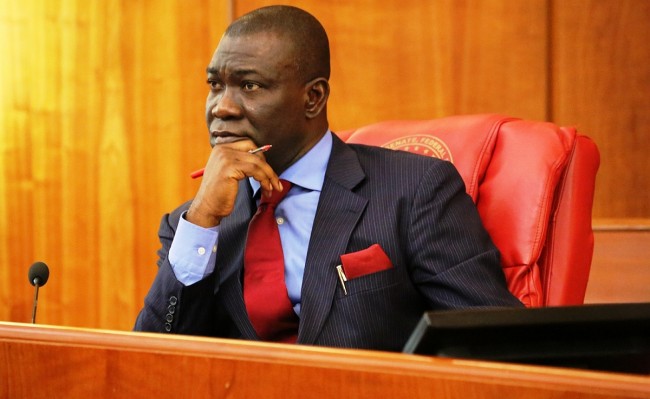 Economic and Financial Crimes Commission (EFCC) says that it has not decorated the Deputy Senate President, Ike Ekweremadu, as “Anti-Corruption Ambassador” of the commission.

This was made known in a statement made available by the Head, Media & Publicity to EFCC, Wilson Uwujaren on Wednesday.

The statement said that the attention of the Economic and Financial Crimes Commission, EFCC, has been drawn to some reports in the print and online media, on April 20, 2016 claiming that the anti-graft agency has decorated the Deputy Senate President, Ike Ekweremadu, as “Anti-Corruption Ambassador”.

It said that according to a statement issued to the Press by the Special Adviser to the Deputy Senate President, Uche Anichukwu, the purported decoration, was carried out by the EFCC National Assembly Liaison Officer, one Suleiman Bakari who was quoted to have said: “ On behalf of my acting chairman, Mr. Ibrahim Mustafa Magu and the entire management and staff of the EFCC, decorate you as an Anti- Corruption Ambassador and formally present this frame, as a token of our appreciation to your person and office, and as a symbol of the institutional partnership between the EFCC and the National Assembly”.

The statement said the EFCC totally dissociates itself from the purported action of Bakari as he acted entirely on his own and clearly outside his liaison officer brief as he was never instructed by the Acting Chairman nor mandated by the management and staff of the Commission to decorate Ekweremadu or any officer of the National Assembly as ‘Anti- Corruption Ambassador’.

It added that the Commission views this highly unprofessional and conduct of the officer as yet another manifestation of ‘Corruption Fighting Back.’ This leg of the despicable campaign, which is unfortunately being carried out by a staff of the Commission, had been foreshadowed in recent weeks by other questionable acts.

“For instance, all through last week, some courts issued a string of anti-EFCC rulings looking like calculated attempts to derail the anti-corruption war, even as there were indications of the capture of a prominent section of the media by dark forces.” It said.

“The picture of organized corruption marshaling its evil forces to launch a sustained fight-back becomes clearer, if cognizance is taken of the bewildering insistence of the Senate to carry on with the ill-advised amendment of the Code of Conduct Bureau and Code of Conduct Tribunal Act as well as the inexplicable provisions proposed for amendment of the Anti-Money Laundering Act.

“Let it be underscored that the statutory mandate of the EFCC is the investigation and prosecution of all economic and financial crimes cases, which does not include phoney decoration of any individual as “Anti-corruption Ambassador”.

“That award and title are unknown to the EFCC and could not have been invested as purported, on behalf of the Acting Chairman, Management and staff of the EFCC.” The statement said.

The statement further said that the Commission is not in the habit of awarding titles to individuals. Those who seek titles for reasons of waging a counter-onslaught against the war on corruption in addition to massaging inflated sense of influence know the quarters to approach for such dubious honours, not the EFCC.

It urged members of the public and stakeholders in the fight against corruption to disregard the so-called decoration, while stern administrative action is being taken on the clearly misdirected officer who acted entirely without authorization.

NEWER POSTSenate does not have the power to summon any judge, including Justice Danladi Umar~SERAP
OLDER POSTUS Ambassador To UN Motorcade Hits And Kills Boy In Cameroon