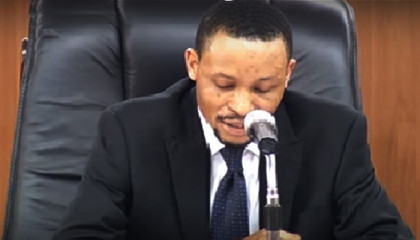 The Economic and Financial Crimes Commission (EFCC) has conveyed a letter to the Chairman of Code of Conduct Tribunal, Mr Danladi Umar, exonerating him of alleged N10 million bribe by one AbdulRashid Owolabi.

Information on the letter is contained in a statement issued to newsmen by the Head, Press and Public Relations of the Tribunal, Ibraheem Al-hassan, on Wednesday in Abuja.

He said that the letter was addressed to the Secretary to Government of the Federation, captioned ‘‘RE: Investigation Report RE: N10 million Bribery Allegation Against the Chairman, Code of Conduct Tribunal, Abuja.

He stated that “the EFCC position with regards to this matter as earlier communicated to you, on allegations leveled against Justice Danladi Umar were mere suspicious and consequently insufficient to successfully prosecute the offence.

“Today’s clearance letter is second to the previous one sent on March 5, 2015 during last administration of President Goodluck Jonathan through the office of the then Secretary to the Government of the Federation, Chief Anyim Pius Anyim.”