Dr Bukola Saraki President of the Senate, says all the grey areas in the 2016 budget have been resolved. 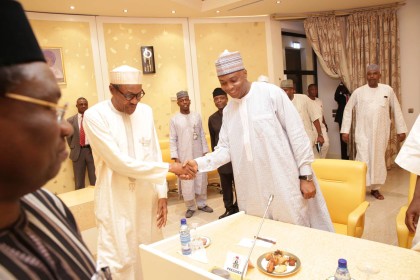 Saraki made the statement on Tuesday night while addressing with State House correspondents after a closed-door meeting with President Muhammadu Buhari in Abuja.

Buhari met with the leadership and principal officers of the National Assembly, as part of efforts to resolve the 2016 budget impasse.

Saraki said that the lawmakers came to inform the president and his team of the solutions they had found to the budget impasse.

He said that both sides agreed on the way forward and assured Nigerians that the process would be completed in a matter of days.
“We just finished a meeting with the president and the vice-president.”

“We came to let them know some of the solutions that we found in moving the budget process forward and we are happy to say that we have agreed on the way forward.”

“We believe that this process will be completed in matter of days rather than weeks.”

“So, it is good to Nigerians and all of us, we have found a way forward and in a matter of days, the budget will be ready for the president’s assent,’’ he said.

Saraki also said that committees had been set up on both sides to hasten actions on the process.”

He said that the committees would meet over the next few days to “tidy up a few loose ends here and there and the outcome will be satisfactory to everybody.’’

Also, the Minister of Budget and National Planning, Mr Udoma Udo Udoma, said the executive and legislature had agreed to resolve all grey areas in the budget.

“We have agreed to work together to resolve all issues in the next few days and we have also agreed on the modalities of or doing so.”

“It was a very good meeting and it was very positive; within the next few days, all issues will be resolved.”

“We are working together, both the executive and the legislature, to sort those things out. Within the next days, all matters will be resolved,’’ he added.”

Others were Senate Minority Leader Godswill Akpabio; House Leader Femi Gbajabiamila, among other leaders of the National Assembly as well as Chief of Staff to the President Abba Kyari.