2 Arraigned For Conspiracy And Land Scam 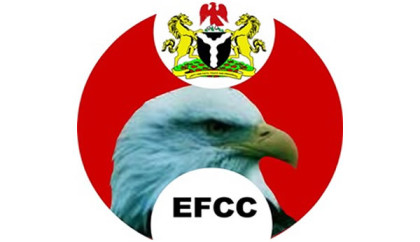 The Economic and Financial Crimes Commission EFCC, on Wednesday April 27, 2016, arraigned Nnaji Steven and Nnamani Sunday on a four count charge bordering on forgery, uttering and conspiracy to obtain the sum of N 330,000.00 (three hundred and thirty thousand naira ) by false pretence, under the guise that they own a piece of land at Nike in Enugu State which they claimed was up for sale and swindled a certain Ofurum Uchida of the said sum.
The offence is contrary to Section 8 (a) of the Advanced Fee Fraud and Other Fraud Related Offences Act, 2006.

The accused persons pleaded not guilty to the charges preferred against them.

Justice Yunusa granted the accused persons bail in the sum of N5 million and two sureties in like sum. The first must be a civil servant of grade level 15, while the second must show evidence of tax payment for three years.

But before adjourning to June 16, 2016, the Judge ordered that the accused persons be remanded in prison custody, pending when they perfect their bail conditions.

Tthe Charge Reads:
“That you, Nnadi Steven and Nnamani Sunday on or about the 18 day of June, 2008 in Enugu within the Jurisdiction of the Federal High Court of Nigeria, with intent to defraud obtained the sum of Three Hundred and Thirty Thousand Naira only (N330, 000.00) from Ofurum Uchida when you represented yourselves as owners of a piece of land known as Plot 167, situated at Aguoja Layout, Ibeagwa Nike Enugu, a representation you knew to be false and thereby committed an offence contrary to Section 1 (1)(a) of the Advanced Fee Fraud and Other Related Offences Act, 2006 and punishable under Section 1 (3) of the same Act”.