Empower54 a humanitarian group based in the United States at the weekend held an annual ‎Charity auction in Atlanta capital of Georgia State which was dedicated to raising funds to help in rebuilding schools destroyed by Boko Haram insurgents in different parts of Borno State. 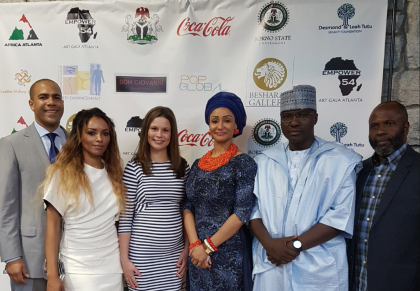 Legislators from the State of Georgia, officials from international relations department of Georgia’s government, movie actors, Americans, African-Americans from different states in the United States, Governor Kashim Shettima who was represented by his Special Adviser on Communications and Strategy as attended the event on Saturday night at Besharat Gallery (of arts) in Atlanta.

A statement emailed to journalists by Mr Gusau, says during the auction, dozens of high class paintings donated by different creative artists were put up for sale at different prices with opening bids as high as $13,000 for a 40 by 31 inch oil on canvas painting titled ‘Rites of Fertility’ donated by an artist, Leonard El-Dragg Okwoju. Other paintings had different opening prices ranging from $11,000 to the lowest opening bid being $1,500. Invited guests made donations through auctions.

Grand Patron of the Empower54, Arch-Bishop Desmond Tutu through a video message, persuaded donors to support victims of the Boko Haram insurgency ‎in whatever ways they could.

Invited as Special Guest, Borno Governor, Kashim Shettima who was represented by his Special Adviser on Communications and Strategy, Malam Isa Gusau expressed gratitude for the support but however called on Governments of foreign countries to help in assessing the integrity of numerous Non-Governmental Organizations who seek donations with claims of supporting victims affected by the Boko Haram insurgency ‎in Borno and other parts of the northeast.

Shettima said he had no doubt about the integrity of those behind Empower54 especially with persons like Bishop Tutu putting their voices behind the group. The Governor commended founder of empower54, a Nigerian and member of the Benin royal family in Edo State, Princess Modupe Ozolua for her passion in complimenting the giant efforts of the Federal and Borno State Government. Shettima recalled that a total of 5,335 classrooms and other school buildings were destroyed by the insurgents with 512 primary schools, 38 secondary schools and two tertiary institutions affected in Borno State. The Governor said he sent a representative because he was touched by the choice of the Charity group which is rebuilding of schools.

Founder ‎and host of the auction, Princess Modupe Ozolua said after her visits to some parts of Borno State where she saw very cruel destructions by Boko Haram, she thought it was wise to select rebuilding of schools in order to contribute in the future of the State and to also complement the good works she saw the Borno Government already doing in some communities.

Ozolua pledged absolute transparency and prudence in the utilization of donations for works in public schools. “The Borno State Government alone and the Federal Government cannot fix the destructions we saw without support from far and near. We need to rebuild schools in affected communities. I assure you that with your support we will fix things” the princess said.