The Minister of Finance, Kemi Adeosun said on Thursday in Lagos that the N165 billion monthly salaries to federal civil servants was over-bloated and could no longer be sustained by government. 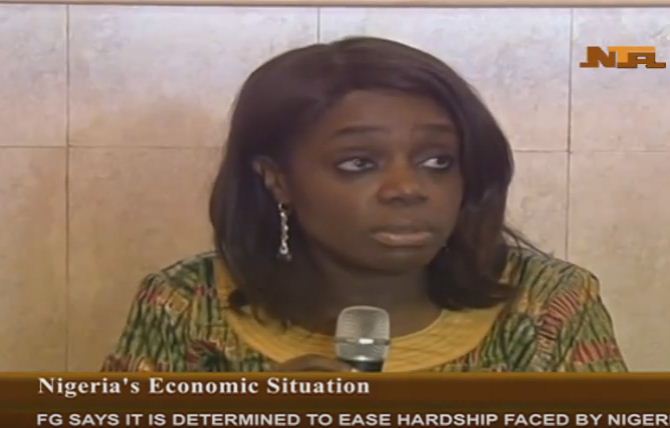 The minister spoke at a meeting with Newspaper Proprietors Association of Nigeria (NPAN) hosted by her counterpart in the Ministry of Information and Culture, Alhaji Lai Mohammed.

Adeosun who was speaking on the economy reform agenda of the government, said that the N165 billion being paid to federal civil servants monthly represented 40 per cent of the total spending of government.

She said the figure was too high and government was pursuing aggressive measures to detect and prosecute ghost workers and other saboteurs in the system.
“We spend 165 billion every month on salaries and when I came in there was no checking.

“Now, we have created a unit assigned with the sole responsibility of checking the salaries and catching those behind the over bloated salaries,’’ she said.

Adeosun said that the Integrated Payroll and Personnel Information System (IPPIS) introduced by the previous administration were faulty and sabotaged by the element benefitting from the salary fraud.

She said that many Federal Government establishments including the Police were yet to be captured in the system.

According to her, it is shocking that the Nigerian Railway Corporation which was not fully functioning still had 10,000 workers in its payroll serviced by government.

The minister assured that government would correct the anomalies in the payroll system and weed out all ghost workers in the service.

Adeosun said that the fiscal focus of the administration was to ensure an economic growth that would be measured on job creation and productive sectors.

“People must be productive for the economy to grow.

“We have been a consumer economy, but we want to be productive and stop buying everything from abroad.

“We have been borrowing to pay salaries for years and that has to stop because it is not sustainable.

“Last year, we spent N64 billion on travelling and only N90 billion on roads. Travelling does not grow the economy and this must also stop,’’ she said.

The minister said that the compound GDP of the country had been growing negatively in the last 10 years and the administration was working to correct the trend.

She assured that the administration would be the most discipline government the country has ever had in terms of fiscal accountability and responsibility.

Also speaking at the meeting, the Minister of Agriculture, Audu Ogbeh said government would reposition the agricultural sector to become the mainstay of the economy.

“The ministry will give policy direction and coordination to make farming attractive and for people to practice it as business.

“Government will put policy in place to recover the 22 billion dollars which is floating out of the country’s resources to sustain farms in other countries back to our villages.

“Government will also ensure that bank review the two digits interest rate on loan to farmers and other productive sector.

“The change promised may appear to be slow, but it is actually taking place. In this year, we have harvested million tons of rice,’’ he said.

The Minister of Environment, Amina Mohammed said government would complete the clean-up of the Ogoni land in the next one year and ensure the degraded land was revived for productive purposes.

She said the Great Green Wall project of planting trees to control desert encroachment would also be given priority by the administration.