Arms Deal: How I Received N108m From Former CDS – Witness

At the resumed trial of a former Chief of Defence Staff, CDS, Air Chief Marshal Alex S. Badeh, on Tuesday, May 24, 2016 the fourth prosecution witness, PW4, Mustapha Yerima gave Justice Okon E. Abang of the Federal High Court Abuja a blow-by-blow account of how he was paid the sum of N108million through Badeh’s company, Vetivo Nigeria Limited. 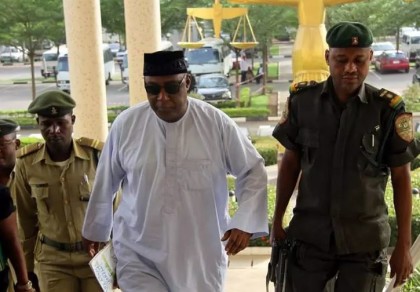 Wilson Uwujaren Head, Media & Publicity of the Commission, disclosed this in a press release made available in Abuja today.

Yerima whose testimony started yesterday stated that, the process of the payment came through a third party.

According to Yerima,” the payment that came through a third party is as a result of the meeting between myself, Air Comodore Yushau (a retired Air Commodore and former director of finance and account) and Badeh. This was prior to my meeting with Air Commodore Yushau and Barrister Timothy Muje.

At the meeting, Yushau introduced Timothy to me as the lawyer to Air Chief Marshall Badeh since he (Yushau) was retiring. He said I should transfer all the necessary documents to the lawyer (Timothy).’’

He stated that, “Yushau came to the said meeting with prepared Deed of Assignment and Power of Attorney with his company’s name and another document transfering the title from Ryte Builders to Edile Construction Company.

He was given a copy to sign and he did. He said he handed over to Timothy, the original Certificate of Occupancy, C of O, and the Deed of Assignment.”

After the tranfer of the documents, Yerima claimed that he recieved the sum of N108 million.

’’I recieved an alert from one Vetivo Nigerian Limited. I called Badeh and he confirmed that Vetivo Nigeria Limited was his and he instructed that the money be paid into my company’s account”, Yerima revealed.

He further narrated how Badeh out of fear changed his mind from the property that he earlier wanted to acquire for the construction of his shopping mall at Aminu Kano Crescent and opted for the one located at the Wuse 2 District of Abuja.

According to Yerima, when the transactions were no longer clear to him, and he was denied access to the Power of Attorney he had earlier given to Badeh and his men, he became agitated and decided to tell the EFCC all that he knew about Badeh and the property he acquired which costs about N1.8billion including the land.

’’I was confronted with some chilling evidences, so many documents like the copies of drawings, list of quantity survey, statement of accounts and so many other documents related to the account including e-mail correspondences. At that point, I had nothing to say, but to tell the EFCC exactly the way things happened”, Yerima said.

The PW4, also narrated how the Nigerian Airforce Conference Centre was constructed.

He added that, all payments made to Ryte Builders in respect of the mall were made to Ryte’s Builders account with Zenith bank.

At this point, the prosecution counsel, Rotimi Jacobs, SAN told the court that he discovered just yesterday that the witness made additional statement which he had served on the first and second defense counsels.

Badeh’s counsel, Akin Olujimi, SAN, said, ”for me to be able to cross examine the witness, I will have to digest this additional proof to see how it affects our understanding of the prosecution.”

Badeh, while being the CDS, among other things allegedly abused his office between January and December, 2013. He allegedly used dollar equivalent of the sum of N1.4billion (One Billion, One Hundred Million Naira) removed from the accounts of the Nigerian Air Force to purchase properties in choice areas of Abuja.

The offence is in contravention of Section 15 (2) (d) of the Money Laundering (Prohibition) Act, 2011 (as amended) and punishable under Section 15(3) of the same Act.