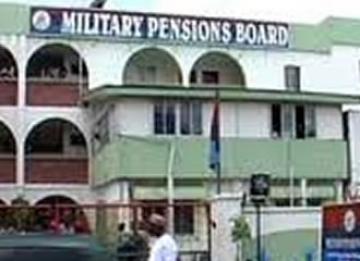 The Military Pensions Board (MPB) says payment of 33 per cent increment arrears owed military pensioners since 2010 will be completed by the end of 2017.The Chairman of the Board, Air Vice-Marshal Muhammad Dabo, disclosed this in an interview with the News Agency of Nigeria (NAN) in Abuja on Wednesday.

He said the administration of Muhammadu Buhari was committed to the welfare of Nigerian military pensioners and had been fully supportive of the board’s activities in the past one year.

“There has been actually some outstanding issue no doubt about it, the issue of pension arrears is there, 2014 was the year when the retirees agitated for that payment of arrears.

“I was part of the meeting with the former Minister of Finance where it was agreed that the arrears cannot be paid for three years lump sum.

“But that they will be budgeting the arrears on a yearly basis and be paying them on quarterly.

“Last year, arrears for one year was paid, this year too, we have paid first and second quarters.

“As far as that one is concerned, the arrears of 33 per cent is being paid on quarterly basis and so far arrears for one and half years have been paid.’’

Dabo said the board would sustain measures adopted to engage pensioners on issues bothering on their welfare and payment of accruing benefits.

On the complaints by retirees on the health insurance scheme, the chairman said the Health Management Organisation in charge of the military retirees was addressing the complaints.

He however noted that the scheme only covered the primary health needs of the beneficiaries and not all health issues as canvassed for by the retirees.

“The essence of the health insurance is actually to cater for the primary healthcare needs of the retirees.

“But in most cases you find out that their cases involve tertiary healthcare, for which they would need to commit some money because their insurance did not cover that.

“There could be challenges and I am sure the MD of the Defence Health Maintenance Agency Ltd will address it because once you choose the hospital of your choice they will be able to take care of you.’’

Dabo assured the pensioners that the board would soon unveil a set of packages that would improve their wellbeing in addition to making payment of pensions seamless. (NAN)

NEWER POSTNigeria Will Stabilize And Return To The Path Of Growth – Ekweremadu
OLDER POSTNTA Network News Summary: What You Need Know Today 25th May 2016