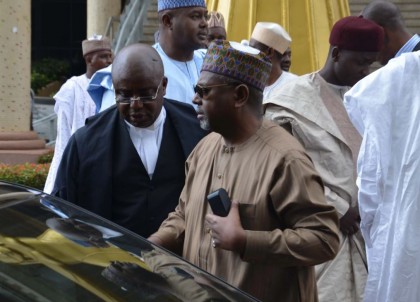 Daudu, who was represented by Adeola Adedipe at the last adjourned date, May 23, 2016, had urged the court to adjourn the trial of his client sine die on the grounds that the prosecution had frustrated the order of the court given on April 6, 2016 to provide adequate facility for him to be briefed by his client.

Ruling on the matter, Justice Baba-Yusuf had consequently ordered that the first defendant be brought to the court premises during business hours between Monday and Friday to allow him brief his counsel.

However, at the resumed hearing today, Daudu told the court that he was not ready to proceed with the trial.

He told the court that he had filed a motion asking that the prosecution consolidate the charges involving the first defendant before Justice Baba-Yusuf and Justice Peter Afem of the FCT High Court.

According to him, ‘‘It is unconstitutional to try the defendant over a similar matter before two different FCT High Courts.’’

Counsels to the other defendants also acknowledged receipt of the motion, but did not object to the commencement of the trial today.

However, in his reaction, prosecuting counsel, Rotimi Jacobs, SAN, stated that it was not right for the court to hear the motion.

Quoting Section 396, Sub-section 1 and 2 of the Administration of Criminal Justice Act, Jacobs said counsel to the first defendant could file the motion, but the court would only decide on it at the end of the trial.

Jacobs, who said Daudu had raised an issue over the validity of the charge before the court, further said that ‘‘the defendant has filed three objections with the intention to stall the trial and frustrate the day-to- day trial of the case.

“After the court ordered at the last adjourned date that the first defendant be brought to court to brief his counsel, his counsel insisted that he was not going to have any meeting with his client, thereby showing that he is not interested in the commencement of the trial.

“Though counsel to the first defendant is asking that the charges be consolidated, each matter will still retain its separate identity.

“The prayer is self-defeating. Besides, the second file is not before this court. So, they should apply to the Chief Judge to transfer the other matter to this court. Or will my Lord decide on a matter that is not before him?

“My Lord, I urge you to compel us to proceed with this trial. Enough of time wasting tactics by the first defendant.”

Justice Baba-Yusuf, who was obviously miffed by Daudu’s argument, initially said he would go into the trial today.

According to him, ‘‘You should go to the other court and ask that the case be struck out, since this case had first been filed before me. I am going into the trial today.

“I have granted you enough respect. So, what you asking for is an insult on me. If you have a court where people dance to your music, go there. As the matter is, I will give the file to the Chief Judge for re-assignment.”

At that point, Daudu interjected that he would not mind if the matter was re-assigned.

Reacting to Daudu’s statement, Justice Baba-Yusuf further said: ‘‘People come to court with dishonest motive. I knew this was going to happen. This is what you do.’’

Counsel to the second defendant, Shuaibu Salisu, Akin Olujimi, SAN, pleaded with Justice Baba-Yusuf to adjourn the case to enable all parties involved ‘‘ to sort out things among ourselves.’’

Consequently, Justice Baba-Yusuf adjourned to June 15, 2016 for hearing on the motion filed by counsel to the defence counsel.