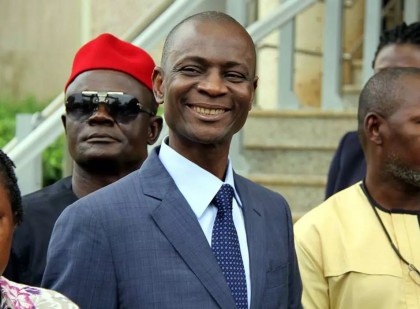 Azibaola and his wife, Stella, were arraigned alongside their company, One Plus Holding Limited on a seven 7-count charge bordering on money laundering, criminal breach of trust and corruption by the Economic and Financial Crimes Commission.
The couples were alleged to have diverted $40million (forty million US dollars) purportedly meant for the supply of tactical communication kits for Special Forces.

The money was transferred from the account of the Office of the National Security Adviser with the Central Bank of Nigeria to the domiciliary account of their company, One Plus Holdings.

The offence is in contravention of Section 8(a) of the Money Laundering (Prohibition) Act, 2011 as amended in 2012 and punishable under Section 15 (3) of the same Act”

Count one reads:
“That you, Azibaola Robert (M), being the Managing Director/ Chief Executive Officer (MD/CEO) and a signatory to the Zenith Bank account of ONE PLUS HOLDINGS. LTD; Mrs. Stella Azibaola Robert, being a director and a signatory to the Zenith Bank account of ONE PLUS HOLDINGS NIG. LTD and Amobi Ogum (M) (now at large) on or about the 8th September, 2014 in Abuja within the jurisdiction of this Honourable Court did conspire among yourselves to commit an illegal act to wit; money laundering of the sum of $40,000,000.00 (Forty Million United States Dollars) transferred to the domiciliary account of ONE PLUS HOLDINGS NIG.LTD with Zenith Bank Plc, Account No. 5070365750 from the account of the Office of the National Security Adviser with the Central Bank of Nigeria upon a transfer mandate Ref. No. 128/S.5LX/139 purporting to be for the supply of Tactical Communication Kits for Special Forces and you thereby committed an offence contrary to Section 8(a) of the Money Laundering (Prohibition) Act, 2011 as amended in 2012 and punishable under Section 15 (3) of the same Act.”

The defendants pleaded not guilty to all the counts preferred against them.

In view of their plea, counsel to EFCC, Aliyu Yusuf urged the court to fix a date for trial and remand the accused in prison custody.

However, Robert’s counsel, Chris Uche, SAN, told the court that he had a pending application dated May 24, 2016 brought pursuant to Section 36 (5) of the constitution of the Federal Republic of Nigeria 1999 seeking for the bail of his client to enable the defence prepare for trial.

Moving the bail application, Uche argued that bail is at the discretion of the court, adding that the offence is bailable.

He went on to inform the court that, the defendant had been in EFCC custody for over two months and the constitution is clear on how long a suspect should be kept before being arraigned.

To this, Uche contended that Robert’s right as a citizen to bail as guaranteed by law had been breached.

The same argument was also canvassed by Stella’s counsel, Gordy Uche, SAN, to seek her bail.

Uche stated that Stella had been on administrative bail granted by the EFCC and has not breached any of the terms.

He urged the court to refuse the applications considering the severity of the offence which according to him carried a punishment of between 7 to 21 years imprisonment.

On the issue of the detention of the first defendant, Yusuf told the court that at no time did EFCC detain any defendant without a valid court order.
He said that the second defendant who predicated her application for bail on health grounds did not provide any medical report to back it up.

While Justice Dimgba ruled that Stella could continue to enjoy the administrative bail earlier granted her by the EFCC and adjourned to June 8, 2016 for ruling on the bail application of the first defendant.