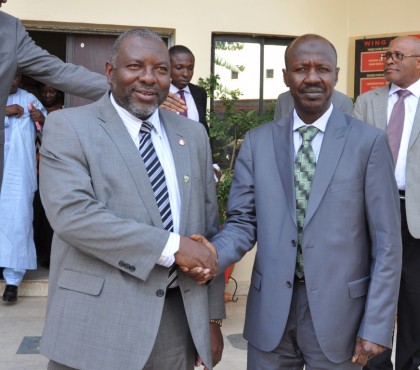 The acting Director– General and Chief Executive Officer, Standard Organisation of Nigeria, SON, Dr. Paul Angya, has sought the assistance of the Economic and Financial Crimes Commission, EFCC, in tackling the menace of sub-standard products in the country.
Angya  stated that the importation of sub-standards products into the country had caused most indigenous companies to fold up.
According to him, ‘‘Most people prefer to buy the cheap goods, not knowing they are fake.’’
Speaking during a courtesy call on the acting Chairman of EFCC, Ibrahim Magu, on Wednesday, June 15, 2016, Angya said: ‘‘it has been on our minds to pay you a visit to solicit for your support, since we took over the leadership of the SON. This is because we believe we should run to you for partnership. We feel that it is better for us to synergize with other sister  agencies that support the fight against corruption  because it is a common fight.’’
Angya , who also stated that the Nigerian economy would get better if there were no sub-standard products either manufactured locally or imported, added : ‘‘We offer consumer protection services to save human lives that would have been lost through fire outbreaks caused by sub-standard cables, sub-standard car tyres, sub-standard food items like tomato paste, among others.’’
He also described the effect of sub-standard goods on the nation as the worst type of corruption ‘‘because it costs people’s lives, health and properties.’’
Responding, Magu, who expressed his appreciation for the visit, assured the delegation of the Commission’s support, adding that ‘‘I will not hesitate to send one or two of my staff to help you out in your investigation to bring the perpetrators to book.’’
Wilson Uwujaren
Head, Media & Publicity