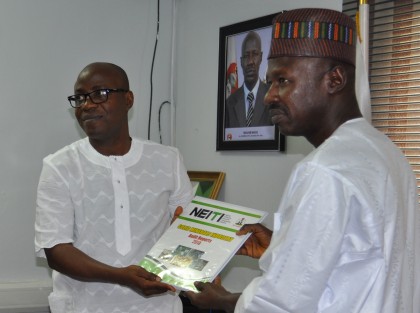 The Executive Secretary, Nigeria Extractive Industries Transparency Initiative, NEITI, Waziri Adio, has expressed the readiness of his agency to collaborate with the Economic and Financial Crimes Commission, EFCC, in tackling corruption in the Nigeria by reporting serious infractions that violate the country’s constitution.
He made this disclosure on Friday, June 17, 2016 during a courtesy visit to the acting Chairman EFCC, Ibrahim Magu at the Commission’s Head Office, Abuja.
According to him, “we have an Act that criminalise certain behaviours; if people do not corporate with us, if people do not give us information on time, they are liable to be prosecuted, fined and jailed. But, we have existed for 12 to 13 years and nobody has ever been tried under our Act and that is not to say some infractions would not have occurred.”
Adio stated that the major issue is the lack of power to prosecute, adding that NEITI as an organization, only carries out audit.
“There are a lot of findings that have come up over time about monies missing, about collusion between operators and government agencies, about possibility of money laundering, about all kinds of economic crimes that we are not in a position to push forward”, Adio said.
According to the NEITI boss, the “2013 Oil and Gas Audit Report” revealed that some government agencies like NNPC and its subsidiaries withheld 3.8billion USD and N358billion.
He said that another revelation is that, 12.9 billion USD were withheld by NNPC from NLNG between 2005 and 2013.
The NEITI boss stated that deepening relationship with EFCC would help send signals to all the agencies and companies that relate with NEITI to cooperate with it.
Responding, Magu, assured the delegation that the Commission was prepared to give a quick response in areas of need and to improve on the existing relationship between the two agencies.
“Where you want us to use our teeth to bite, we would readily do so”, Magu assured.
Wilson Uwujaren
Head, Media & Publicity