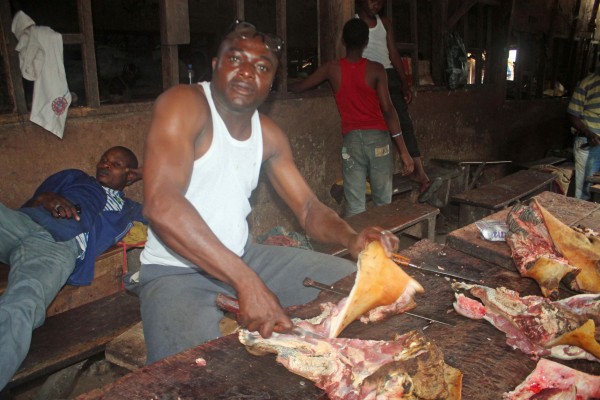 FEATURED: The Common Man’s Guide To The New CBN Forex Policy, As Explained By A Local Butcher

Last week the CBN through its Governor, Godwin Emefiele, released new guidelines for exchange rate policy for Nigeria. We saw words like “float”, “market-driven”, “More Flexibility”, “float freely” and so on but most of us non-financial experts understood almost nothing of all the financial terminologies.

While Press titles containing “Naira devaluation” is in-accurate, as the CBN didn’t devalue the Naira but floated it. So it was with happiness when we saw The Fu’ad Explanation using the Local Butcher experience. We believe it is the best explanation of the new policy so far. The post below has been reproduced with permission of PartyJollof.com:

The Governor of Central Bank,  Godwin Emefiele, on the 15th of June announced a new foreign exchange policy called the “Automatic exchange mechanism of the exchange rate”.

In simple terms, they are floating the Naira, which is a lot like throwing a floater into a swimming pool and not touching it, but allowing the movement of the water and the breeze decide where it goes.

We tried to explain what the new forex policy means through the eyes of a local butcher, let us call him Forestus.

Forestus buys cows, butchers them and sells to customers. But recently, the abattoir management decided that they want to make sure meat does not become expensive, so they decided to peg the price.

Now the abattoir management is selling 10 cows per day, at a reduced price. This might sound like a good thing but those 10 cows are not enough for everyone. So scarcity ensues.

Forestus decides to buy cows from another place. Some people that have up to 1000 cows start bringing them to the next compound to sell. Let us call that compound the BDC cattle market. But Abattoir with their I-too-know is saying that Forestus must sell at the price lower than he bought it. Forestus is like, you know what?

So he just starts to give his meat to his wife to go and be selling to her friends at the ministry. So as they are watching AfricaMagic Yoruba and not doing any work, she’ll just be saying “I have meat for sale oh!”

But you see, this thing abattoir is doing ehn!, the suvvring is too mush. No meat for butchers to sell. No meat for people to buy and use to eat jollof rice or egusi soup.

This is the problem now; BDC has cow, but it is expensive. Abattoir doesn’t have enough cows, but it is cheap. After one year, the abattoir manager, Chief Godwin just says, “This thing is making people suffer sha.” So he listens to what abattoir people have been saying. Chief Godwin decides that he is going to take his hands off the price of cow to an extent, and let everybody start buying and selling as they like.

When we asked Forestus what he thinks about this, he goes.

Now everybody in BDC compound has moved back to the main abattoir. So much cows to sell. But you see, these cow sellers did not reduce the price of their animals. Shakara.

But if Forestus wants to buy cow from Danladi who pegs his price at 100 thousand, and Balarabe in the next stall says it is 90 thousand, who will he buy from?

Nobody will tell Danladi before he will know that he is supposed to reduce the price of his cows. Unless he doesn’t have sense.

Very soon, all the cow sellers will abandon shakara, and since there are plenty cows and plenty options, the price of cow will have to reduce. And everybody can cook soup in peace.

Just like tomato; when it was plenty in the market, 5 plums sold for 100 Naira. But when it became scarce, 5 plums became 600 naira.

Forestus is not an economist, but he knows that the higher the supply of meat, the lower the price. Excess meat in the market, lower prices.

Excess forex in the market, stronger buying power of the Naira. It might not be instant, but it will happen eventually.