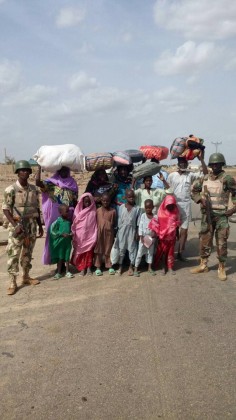 Isa Gusau, Maiduguri: Notwithstanding the Boko Haram insurgency and it’s financial effects on the Government, ‎workers in Borno State have never been owed their salaries in the last 60 months, covering June, 2011 to May, 2016, the State Governor, Kashim Shettima has said.

Shettima who spoke when he hosted members of the Borno Elders Forum and the Business Community in the State for Ramadan Iftar at the Government House on Monday night noted that even though it was sometimes difficult he made it a duty to regularly provide two billion, six hundred million nira (N2.6b) every month to pay salaries while at the same time making expenditures on feeding internally displaced persons and carrying out reconstructions in the last five years.

“Ordinarily, I don’t consider payment of salaries as achievement because salaries are debts, people worked and should be paid. However, in today’s Nigeria, payment of salaries has become rare and this makes it an achievement especially for a State like Borno that which has been battling with serious security challenges and spending billions over that. Well, we have sustained payment of salaries for an economic reason. It is elementary knowledge that salaries of workers mostly stimulate local economies especially in a situation where export is cut and there is gross decline in the number of persons coming into the State not to talk of doing business. We made it a duty to inject funds into the system through prompt payment of salaries by 25th of every month even while we were dealing with serious crisis of rebuilding communities from 2011 to date. We had to pay salaries because workers were at a point the only buyers of commodities, traders relied on salaries for the economy to be active. We had to consistently inject N2.6 billion for salaries of workers every month and that money circulated around markets. The money was what was going in circles from markets to the transport system, to the banking sector and to payment of other services. It was the salaries that held Borno’s local economy because nothing was happening before 2015, our exporters couldn’t go anywhere, whatever our traders brought in could only be bought when money circulated and salaries ensured that circulation” the Governor said.

He explained that there instances the State tops as much as N700 million on federal revenue of N1.9b to pay salaries. He promised that the Government will sustain the salaries especially with the ongoing biometric exercise that is designed to eliminate ghost workers and cut down Government salary bill of N2.6b to something lower.