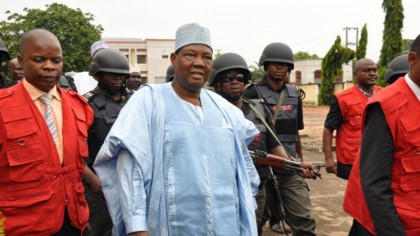 Wilson Uwujaren, Abuja: The trial of a former governor ofNasarawa State, Aliyu Akwe Doma, and two others continued on Wednesday, June22, 2016 before Justice Agatha A. Okeke, with a prosecution witness, EgoMaikeffi Abashe, the Clerk of the Nasarawa State House of Assembly, revealinghow the former governor had allegedly diverted the sum of N350m from the statefunds.

Doma alongside Timothy AnthonyAnjide, a former Secretary to the State Government, and Dauda Egwa, aformer Accountant-General, are being prosecuted by the Economic and FinancialCrimes Commission, EFCC, on a 10-count charge bordering on money laundering andfinancial crimes. Theaccused persons between January, 2007 and December, 2009 allegedly conspiredand fraudulently laundered state funds to the tune of N8bn, an offencecontrary to Section 14(1)(a) of the Money Laundering (Prohibition) Act2004 and punishable under section 14(1) of the same Act. At the resumed hearing today, Abashetold the court there was no approval or record by the House of Assembly for thesum of N350 million allegedly disbursed under the title of ‘‘specialreleases’’.

Abashe, who was led inevidence by Kemi Phinheiro, SAN, also told the court that the State House ofAssembly did not initiate the disbursement of N70 million as shown to him inexhibit 23aa-cc.

According to him, funding of theHouse of Assembly is initiated by a memo and not by any other means.

While being cross-examined by A. F.Yusuf regarding the disbursements, he said that he was not the Clerk as at thetime the disbursements were carried out.He, however, said the procedures fordisbursement were the same and were all in the files.

He told the court that thedocuments were to guide government officials, ministries, departments andagencies particularly in areas of finances. Ishaq, who was formerly a directorin the same office, said: “It was proposed that the governor could not makeexpenditure above N50m. However, the Governor can expend any amount andlater make ratification provided that the expenditure was done in the interestof the state and in accordance with due process.’’

When Ishaq was presented withexhibit P20, which was an approval for N496 million initiated by the Office ofthe Secretary to the State government, he told the court that there was no ratificationby State executive council for it.

Also, going throughexhibit P23 (cc), which was the approval granted by Doma for N150 million and P23 (ba) for N120million , he told the court there was no directive to the State executive forratification and he did not receive any ratification for it either.

The case has been adjourned to June 23, 2016 for continuation of trial