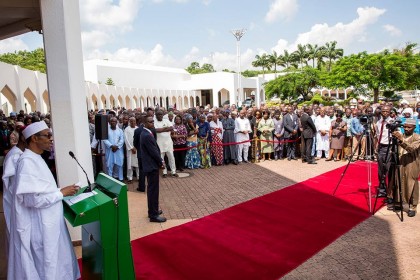 President Buhari stated this in Abuja on Wednesday while addressing staff of the Presidential Villa.

“The matter that may shock you is that 27 out of the 36 states couldn’t pay salaries.

“Up till now some of the states cannot pay salaries.

“What happened to all that we have been getting all this time?

“We looked left, right, centre, up and down and said; any savings?

“There was nothing, because we developed a consumption that we were not supposed to develop.’’

He pledged that his administration’s ongoing war against corruption would be sustained to rid the country of the debilitating effects of the wanton looting of public funds.

“I have never in my life – from class monitor to here for the second time in different form – believed in corruption.

“With what we are doing, if we made any mistake along the line of compromising our integrity, the country would have been further dragged back by blackmail and other things.

“We’ll not touch anybody that did not touch public funds.

“If you behave yourself, you may not have houses in Abuja or in Europe or in America, but you will sleep soundly.

“Your children and families will enjoy respect.’’

The President reiterated the determination of his administration to stop all forms of fraud in the country.

He said security agencies had been alerted to apprehend persons engaged in currency racketeering in the country.

“For those, who have plenty of naira and use bankers and others to stamp papers and buy the dollars and take them outside, we will have to do something else, because we are alerting all security agencies.

“All fraud must be stopped. If they want to believe us is to see those we have caught red-handed, taking public funds.

“This exercise will continue as long as this leadership is here.

“Whoever takes anything that does not belong to him and is not entitled to him and he is caught, he will be documented and taken before the court.’’

He assured that he would continue to lead the country with patriotic zeal, integrity, dedication and commitment to improving the living conditions of ordinary Nigerians.

Buhari thanked the State House staffers for their services to the nation and urged them to remain patriotic and to eschew corruption in the discharge of their duties.

“I’m asking you to re-dedicate yourself to your country.

“As I said thirty years ago, we have no other country than Nigeria; we are determined to rehabilitate the country for coming generations.

“The process of change is not easy, but with your dedication, we can deal successfully with the issues that currently confront us,’’ he said.

In his remarks, the Permanent Secretary, State House, Malam Jalal Arabi, thanked the president for his concern and support to the staff of the presidency.

He stated that the State House staff will remain loyal to the Buhari-led administration in its desire to transform the country. (NAN)