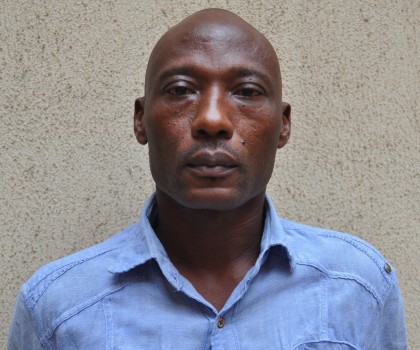 The long arm of the law has again caught up with a suspected fraudster, Olu Adebanjo, who heads a syndicate that extorts money from people in the guise of clearing them of non-existent petition purportedly brought against them at the Economic and Financial Crimes Commission.
The 45-year-old businessman was arrested on June 17, 2016 in a failed attempt to swindle Professor Julius A. Okojie, Executive Secretary of National Universities Commission of N3million to clear him of a purported corruption allegation.
The complainant (Okojie), who also alerted the Commission of the activities of fraudsters impersonating him to defraud vice chancellors of various Universities, was advised to play along.
Consequently, the suspect (Adebanjo) was arrested while trying to cash ‘the money’ from one of the new generation banks.
He will be charged to court as soon as investigation is concluded.
Wilson Uwujaren
Head, Media & Publicity