NGOs Smile To Banks On Agony of Borno Displaced Persons’ 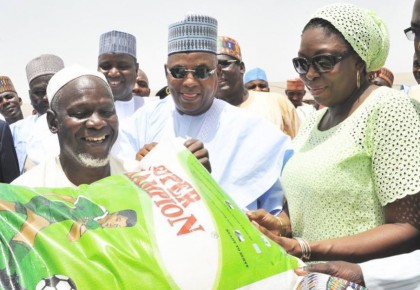 Isa Gusau, Maiduguri: Some Non-governmental Organizations are taking huge advantage of the pains of internally displaced persons in Borno State and defrauding foreign philanthropists under the pretense of trying to help victims of the Boko Haram insurgency, Governor Kashim Shettima has said.

Shettima spoke on Monday when he delivered a keynote address at a High Level Emergency Roundtable on the Humanitarian Crisis in Borno State which was held at the Transcorp Hilton Hotel in Abuja with the attendance of Nigeria’s Minister of Health, Professor Isaac Folorunso Adewole, Permanent Secretary of the State House (the Presidency), Heads of different organs of the United Nations and Donor Agencies including the European Union, the United States Agency for International Development, the British Department for International Development and other actors. The meeting was convened by Dr. Ayoade Olatunbosun – Alakija, CEO of AOA Global, a humanitarian outfit working with the Borno State Government.

The Borno Governor spoke in support of disclosure by the UN Humanitarian Coordinator for Nigeria, Mohammed Elmunir Safieldin who said at the meeting that ‘most of the pictures of critically malnurished infants, children and some adults in circulation all over the social media since last week were those of victims recently rescued by the armed forces from the hands of Boko Haram fighters who held them hostage for years”.
Shettima said some NGO’S go in search of such victims and take their photographs which they share to the world targeting unsuspecting philanthropists to part with funds for the purpose of helping the displayed victims while the fund end up in private pockets.

“I need to open up here by saying that in the midst of credible organizations trying to help us in Borno, we have seen occasional instances of some ‘business groups’ masquerading as NGOs smiling to the Bank on the agony of our people. I do not mean to disrespect any sincere NGO but there are those I have seen, whose only interest is to go round thousands of IDPS and figure out sick and skinny looking infants, pose for the cameras with them and upload on the social media mainly to attract funding from concerned philanthropists abroad. I have seen one example where someone I wouldn’t mention simply sent out horrible pictures of malnurished infants with a caption, DONATE. I think these children, bad as their situation might be, deserve to be respected no matter how much we want to help. We must respect the dignity of post conflict victims as much we desire to be respected as humans” the Governor said.

The Governor also spoke about a statement issued by the Médecins Sans Frontières otherwise called Doctors Without Borders, who said there was acute malnutrition at the IDP camp in Bama with large of scale of hundreds of deaths mostly of children.

Shettima said the MSF didn’t put their statement in a proper context, a situation he said wasn’t quite helpful.
“Yes, the situation is almost overwhelming, the challenges frightening, but we are doing our best to confront them. It is common knowledge to this audience that the operation and management of Internally Displaced Persons camps are historically replete with a litany of problems. Even camps located in advanced countries like the Calais Jungle in France or more professionally managed ones like the Dadaab Refugee Camp in Kenya are not without their bouquet of challenges.
It is against this backdrop that I would like to admonish us to exercise some degree of caution and restrain as we strive to bring the myriad of problems associated with the management of a humanitarian crisis of the scale existing in Borno Sate in particular and the North East in general to an end. For example, the slant of the news report carried by some sections of the International media on the admittedly dire situation in Bama attributed to the Médecins Sans Frontières was, to say the least, rather unhelpful. While we do not deny that the challenges the report tried to convey do exist, sufficient justice was not done to the fact that the Borno State Government, a few reputable NGOs,domestic and International and of course, the U.N. Institutions are doing all we could within the limits of our resources to frontally address them.

It is pertinent to mention that the MSF Statement issued last week completely ignored the fact that interventions were already being made to address the unfortunate cases of malnutrition at the Bama IDP Camp.As at the time the Statement was issued, over 100 Children were hospitalized out of over 1000 malnourished Children and adults evacuated from Bama and placed under special care in Maiduguri. We constituted a Team that successfully evacuated 478 Children and 219 adults on Monday, the 13th of June, 2016 and all of them were immediately taken to a Special Care Unit and 61 Children hospitalized.The following morning,Tuesday, the 14th of June, I was at the Care Unit and the next day, Wednesday,the 15th of June, we summoned all the Stakeholders from Bama, including the Shehu of Bama,for a meeting at the Government House which I chaired and from that meeting we all moved to Bama with dozens of Buses. We went with Officials from Dangote Foundation and IOM, a UNITED NATIONS outfit. Alongside the Shehu, we went round the Camp and 600 additional Adults and Children were certified malnourished and evacuated to Maiduguri. All of these took place before the MSF Statement. Even before my visit to Bama on 15th June, 2016,I was there on 5th April, 2016, together with Toby Lanzer,United Nations Assistant Secretary General and Regional Humanitarian Coordinator for the Sahel. I think if this background had been given, the situation would have been put in a proper context without interfering with the Objective of that Statement by the MSF” the Governor also said.