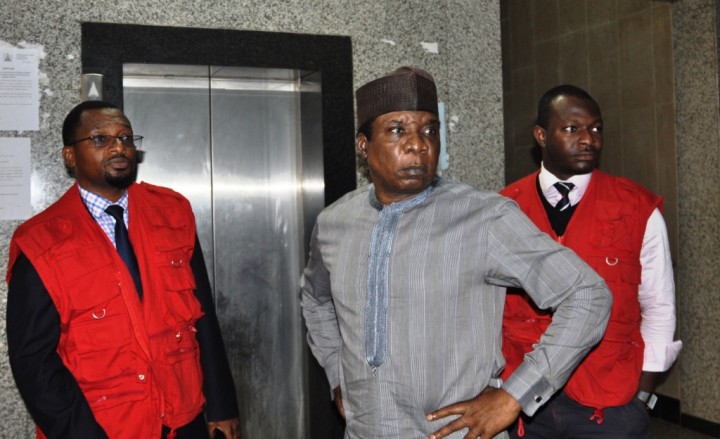 This was made known in a press release made available by the Commission’s Head, Media & Publicity, Wilson Uwujaren on Monday in Abuja.

Omokore is alleged to have used the Strategic Alliance Agreement signed between the NPDC and Atlantic Energy Drilling Concept Limited to swindle the NPDC and the Nigerian government of monies running into billions of dollars through the lifting of crude oil from some oil wells between March 2013 and May 2014.

The other accused persons who were senior management staff of the NNPC are accused of conspiracy in inducing the NPDC to facilitate the lifting of crude by Omokore, Atlantic Energy Brass Development Limited and Atlantic Energy Drilling Concept Limited.

“That you, OLAJIDE JONES OMOKORE, ATLANTIC ENERY BRASS DEVELOPMENT LTD, ATLANTIC ENERGY DRILLING CONCEPT LTD and KOLAWOLE AKANNI ALUKO (now at large) between May 2013 and March 2014 within the jurisdiction of this Honourable Court obtained by false pretense and with intent to defraud, 7,551,867 barrels of crude oil (Brass blend) valued at the sum of $823,75,189.95 (Eight Hundred and Twenty Three Million, Seventy-Five Thousand, One Hundred and Eighty-Nine US Dollars and Ninety-Five Cents) from Nigerian Petroleum Development Company (NPDC), Nigerian National Petroleum Corporation (NNPC) and the Federal Government of Nigeria on the false pretence that you had funds (both local and foreign) necessary to support the Nigerian Petroleum Development Company Limited in petroleum operation for the OML 60,61, 62 and 63 and you thereby committed an offence contrary to Section 1(a) of the Advance Fee Fraud and Other Fraud Related Offences Act Cap. A6, 2010, Laws of the Federation of Nigeria and punishable under Section 1(3) of the same Act”.

The defendants pleaded not guilty to the charges when they were read to them.

Based on their plea, counsel to EFCC, Rotimi Jacobs, SAN, asked the court for a date for the commencement of trial.

After pleas by counsel representing the defendants, Justice Nyako however admitted the defendants to bail in the sum of N50million each with one

surety in like sum. The sureties must either be a director in the federal civil service or must have a landed property in the jurisdiction of the court.

Before taking the defendants’ plea, Justice Nyako had requested that the names of the accused persons not present in court be taken off the charge.

Consequently, Kola Aluko whose name appeared in all the counts as well as former petroleum resources minister, Diezani Alison- Madeueko who appeared on count 8, were deleted from the charge.