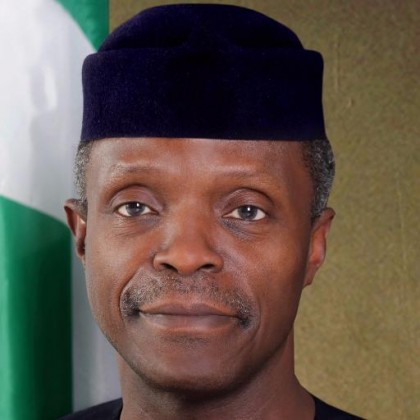 Very Distinguished Guests
I am honoured to have been invited to participate at this important policy dialogue.
The Lagos Chamber of Commerce and Industry is perhaps Nigeria’s most significant private sector group even if only because it is located in the Nation’s commercial nerve centre, and of course draws its membership from that crucial community. Please accept my commendations for this laudable initiative.
I doubt whether there is any need to say that Nigeria in the past 15 months has gone through probably its most challenging period in recent history.
First just by way of providing a context let me start by recalling some of the challenges that we were confronted with when we came into office.

The immediate problem was the sharp decline in oil prices and production, and the lack of savings to cushion the impact. The crisis affected nearly all the sectors of the economy, as reflected in:

GDP declined from 6.3% in 2014 to 2.15% in 2015 and -0.36% in Q1 2016;
Insecurity, especially in the North East, elongated by the corruption in Defence procurement;
FDI, which stood at about USD395 million in Q1 2015 declined by 56% to USD175million by Q1 of 2016. FPI, which averaged USD621 million in Q1 of 2015, had declined to USD90.3 million by Q1 2016.
With the decline in the value of Naira, value of equities have been eroded by over 43% closing at market capitalisation of USD48billion in May 2016 against USD84 billion in same period 2014.
Inflation is at 16.5%. Depreciation of the Naira, increase in importation costs due to scarcity of FX,
Declining earnings from oil in the past eight months due to vandalization of pipelines and export assets in the Delta.
Power output fell from a historic high of 5000MW in February to about 2500 in recent times on account of over 60% loss in gas production due to vandalization of pipelines.
It was in order to tackle these problems that we undertook some specific interventions, which were prioritized and reflected in various ways in the 2016 Budget and its Strategic Implementation Plan.

Permit me to elaborate on some of the steps taken in this regard.

In order to safeguard jobs and prevent further increases in unemployment, the Federal Government paid priority attention to assisting the States and Local Governments so that they could pay the salaries of their workers, which were several months in arrears.

These interventions have helped to boost household and social spending which were key steps to prevent the economy from falling into deep recession.

Deregulation of the downstream petroleum sector has equally had significant increase in the availability of PMS throughout the country. This has been achieved at a price of N145 per litre as against over N200 per litre been paid at most parts of the country prior to the deregulation.

This action has led to reduced daily demand for premium motor spirit (PMS) for which the daily demand has reduced from 1,600 trucks per day to 850 trucks per day. This has resulted in the savings of N1.4 trillion on subsidy payments thereby conserving budget resources and reducing demand for foreign exchange required to import such volumes, which were also smuggled to neighbouring countries because of the previous price differential.

The recent introduction of a flexible exchange rate regime, which has helped to ease the pressure on the external reserves, is equally of note. It is of course true that the immediate effect is depreciation of the Naira and some of the consequences for inflation, etc., but we expect that with the greater clarity we are seeing in the implementation of the policy by the CBN the foreign exchange market will stabilise, and confidence will be restored.

There will be an increase in the supply of foreign exchange especially due to inward investment and increased receipts from non-oil exports. There is already anecdotal evidence that Nigerian agricultural products are being exported to neighbouring countries in substantial quantities and credible sources in the banking sector have also informed us about incipient response in terms of portfolio and foreign direct investments.

We had also pledged to keep capital spending in the budget at a minimum of 30%. This is a target that we are determined to keep since it is investment that grows an economy.

Accordingly, we have already made capital releases of N332billion, which is more than the entire amount released last year for capital expenditure, with another N100 billion set to be released in the next few days.

The main sectors for which the funds have been released are power, works and housing; defence; transportation and agriculture.

One of the first areas in which we brought change about is in public financial management. This has had a consequential effect of saving jobs as well as money. The reality is that every “ghost worker” eliminated at the Federal level is a job saved.

Other policy instruments used in this regard include the Treasury Single Account, which has brought transparency into inflows and outflows of government monies.

The on-going implementation of the Integrated Payroll and Personnel Information System is bringing about monthly savings of N8billion, while the creation of the Efficiency Unit is projected to save N14billion in 2016 fiscal year.

A great effort has been made to improve non-oil revenues; this includes bringing an additional 700,000 companies into the tax net as compared to the targeted 500,000 set at the beginning of the year. Non-oil revenue from both FIRS and Customs continues to lag behind projections partly due to seasonal factors and economic conditions. The FIRS has implemented VAT-COLLECT for auto-tracking and remittance of VAT, increased collaboration with State Governments in tax collection.

FIRS has achieved 73.17% of its target for the first half of the year. In a similar vein, the Customs have undertaken substantial revision of incentives, control and enforcement measures.

In deepening the diversification efforts agriculture is clearly a major priority of this government. The obvious gains are food security and a reduction in the financial burden and pressure on foreign exchange resulting from importing foods that we can produce.

The problem of the agricultural sector is two-fold:

Going forward, the Ministry of Agriculture has now published a roadmap named ‘The Green Alternative’, which is our administration’s strategy for unlocking growth in the agricultural sector.

We do realize of course that the private sector has been the engine of growth in successful economies. This is why we continue to support and encourage massive investments by private investors and key employers of labour as demonstrated by the development of the Dangote Refinery, the Indorama Eleme Petrochemical facilities, Honeywell Sorghum Plant as well as the Golden Sugar and Savannah Sugar projects.

Our intention with other solid minerals is to emulate what has already been achieved in turning limestone into cement. Our recent settlement on Ajaokuta holds out the promise for reviving our iron and steel industry in similar manner.

In addition to benefitting from an improved skills mix in the labour market, the private sector will be a major beneficiary of the infrastructural investments that the Federal Government is making in power, roads, rail and airports. Just to mention some of them, the Abuja-Kaduna standard gauge rail line is up and running while work in underway with regard to the first leg of the Lagos-Kano railway which will run from Lagos to Ibadan and the Calabar-Lagos line which will start at that end.

On road rehabilitation, government has paid N70billion to contractors who had not been paid in over two years with over 70 construction firms benefitting. This has resulted in the recall of not less than 5000 workers. Indeed, work has started on sections of Kano-Katsina; Kano-Maiduguri; Ilorin-Jebba; and Lagos-Ibadan roads amongst others.

You are all witnesses to the fact that the power situation had started to improve after this Administration came into office. The data available shows that average generation rose from 3565MW from January to May 2015 to as high as 5000MW in February 2016.

The situation however has become more challenging by the recent spate of insecurity in the Niger Delta, impacting on the supply of gas for electricity generation. The sabotage of the Forcados export terminal alone cost the loss of 40% of gas supply to power plants.

However, efforts are underway to continue to diversify sources of energy including hydro, biomass, coal and solar amongst others. The recent signing of agreements with 14 solar companies, which is expected to add 1,125 megawatts to the National Grid, is an example in this regard.
In addressing the intolerably high levels of poverty and youth unemployment especially, the Buhari administration established the most far reaching socio investment programme yet. The N500billion is provided in the current budget for social investments.

The programme includes the Home Grown School Feeding Programme, which has started through collaboration with two states already. The number of participating States is expected to become ten by the time schools resume in September 2016.

Similarly, since over 60% of Nigerians are under the age of 25 we are determined to leverage their vigour, dynamism and creativity by tackling youth unemployment upfront.

Current applications on the N-Power website for recruiting young graduates to the Teacher Corps have reached 710,000 and counting.
The delivery model that we are using relies on private sector participation across the value chain.

These measures will be accompanied by improvements in soft infrastructure of rules and processes by removing red tape and other impediments to doing business. By this, I mean that it will become easier to register businesses, obtain land titles, clear goods from the ports, obtain a business visa and pay taxes among other things.

This is why President Buhari has approved the establishment of Presidential Council on Ease of Doing Business. We are already seeing results at the Corporate Affairs Commission, with construction permits and registration of property.

The present administration is a strong believer in public-private dialogue. We have scheduled periodic meetings with the private sector to ensure quality feedback and to make the policy process inclusive. Indeed, we will institutionalize a Quarterly Business Briefing as a means of institutionalizing such policy dialogue starting next quarter.

We fully realize that our plans have to continue and be rapidly implemented if they are to have the desired impact. Nevertheless, we are firmly convinced the Nigerian economy is resilient and will surely turn the corner.

Our economy is robust and resilient; we have incredibly innovative and dynamic entrepreneurs; we have a vibrant market; we have the tremendous resource endowments and we have an uncontested reputation for hardwork.

On the part of government, our tasks are clear: To ensure security, fight corruption and improve the economy.
Our immediate tasks to achieve our economic objectives are:
reduce fiscal and forex imbalances;
boost dollar liquidity;
curb inflation;
lower interest rate and ensure lending to the real sector;
increase FDIs and FPI by sustaining enabling policies;
encourage PPPs and other collaborative engagements in the private sector;
deepen diversification;
create jobs directly and indirectly; and
reduce poverty

I am convinced that if we optimize all of these, Nigeria will finally embark on the path of sustained growth and transformation.

Let me thank the Lagos Chamber of Commerce once again for organizing this dialogue session and assure you that the government will always engage with the private sector in line with the best democratic ideals.