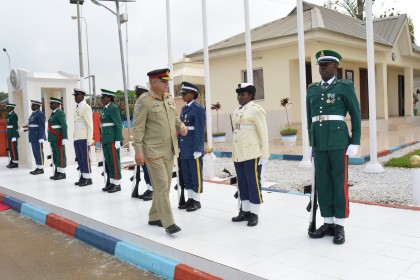 Rabe Abubakar, Abuja: The Director General of Joint Staff of the Pakistani Armed Forces, Lieutenant General Najib Ullah Khan has lauded the Nigerian Armed Forces for their tremendous feat in decimating the Boko Haram Terrorists in the North-East and their steadfastness in curbing other criminalities despite the myriad of security challenges in the country.

General Khan made the remark during a visit to the Chief of Defence Staff (CDS), General Abayomi Gabriel Olonisakin at the Defence Headquarters Abuja. While commending the CDS for his remarkable leadership qualities and direction, he noted that Pakistan and Nigeria has a mutual security commitment to defeat terrorism which has become a global phenomenon, stressing that the two countries need to synergise to defeat the common enemy. General Khan solicited for enhanced military bi-lateral relations with the Defence Headquarters and assured the CDS of cooperation in the area of training and provisions of equipment.

In his remarks, General Olonisakin recalled that Pakistan and Nigeria have excellent military relations. He observed that the two countries have a lot to learn from each other in the resolve to defeat terrorism. The CDS briefed the Pakistani Military Delegation on their collaborative effort of the Multinational Joint Tasks Force and their commendable achievements in the war against terror. He solicited for technical assistance and closer military relations with the Pakistani Armed Forces.

The Director General was accompanied by the Pakistani High Commissioner to Nigeria and other staff officers of the Embassy while the CDS was with his Principal Staff Officers at the Defence Headquarters during the visit. The Pakistani delegation will continue their visit to Service Chiefs and other security agencies in the country.

Highlights of the events included the exchange of souvenirs and group photographs.