FG Issues Report On Intervention Efforts In The North East 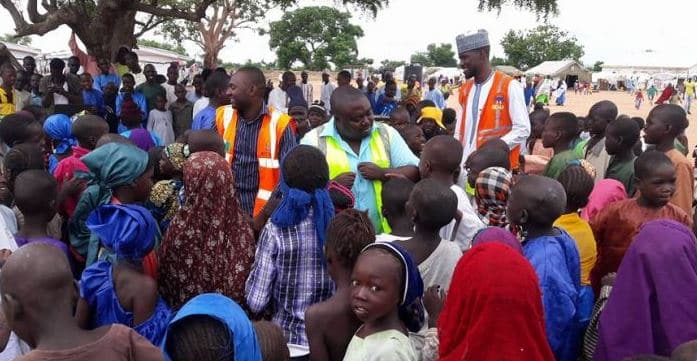 Federal Government says it remains committed in its efforts to ensure that all IDPs are well catered for wherever they are.

FG says that through NEMA, it has distributed thousands of bags of essential food and non-food items to Nigerians in Cameroon, Chad and Niger, according to a report by the Presidency.

The report was made available in a press release issued by the Senior Special Assistant, Media & Publicity, to the Vice President, Laolu Akande on Thursday in Abuja.

The monthly report for August indicated that non-food items supplied to the camps in the three countries from 2015 to date include medical and non-medical supplies such as antibiotics, antifungal, anti-malaria, Anthelmintic, NSAID, non-SAID Analgesics, Antitussives and Antithasmine drugs.

In the report titled Monthly Report Of Federal Government Actions In The North East States Affected By Boko Haram, the Senior Special Assistant to the President (SSA-P) on IDPs in the Vice President’s Office, Dr Mariam Masha, stated that the National Humanitarian Coordination Forum (NHCF) is effectively addressing the welfare of IDPs in these areas.

The Forum, partnering with critical stakeholders, establishes important intervention mechanisms to check and mitigate the incidence and negative effects of flooding on the IDPs in Borno, Yobe and Bauchi States.

The report showed that the Federal Government through the bold initiative of the military has constructed a temporary school for IDPs in the Bama camp and deployed teachers for a population of over 3,000 children.

The scale of humanitarian efforts by the military also cover road construction and reconstruction, donation of educational materials to schools as well as rehabilitation of worship centres and markets in Adamawa and Yobe States.

Commending the commitment of the UN System for its various humanitarian and policy initiatives, Dr. Masha noted that the World Bank organised a workshop towards developing a strategic plan which will assist the Federal Government to effectively articulate and implement its programmes for the North East.

Also, the World Bank and the Federal Ministry of Health are to collaborate with the military and civilian Joint Task Force (CJTF) to vaccinate children in all accessible LGAs in Borno State in support of government’s Polio Response Plan.

National Emergency Management Agency (NEMA), according to the report, relocated a total of 23,391 IDPs from schools that were initially used as camps to new sites in Bakassi and Dalori IDP camps in Maiduguri. Similarly, the Federal Ministry of Education provided emergency classroom supplies for learners in Borno State communities such as Konduga (675), Bama (2500), Dikwa (500), Damboa (500) and Monguno (500).

In Michika LGA, 1,780 IDP households benefited from package consisting of food and non-food items and 2,000 bags of 25kg rice for IDPs were supplied to Gujiba and Gulani towns all in Adamawa State.

It would be recalled that Operation Safe Corridor (OSC) is a programme set up by the Federal Government in its bid to war against insurgency in the North East. The objective of the programme is equally to enhance government efforts to rehabilitate and re-integrate surrendered and repentant terrorist members in the region.

NEWER POSTWhat you need to know about Nigeria’s Economic Recession and How to Brace Yourself
OLDER POSTPresident Buhari In Osogbo, Says Fiscal Discipline Order Of The Day