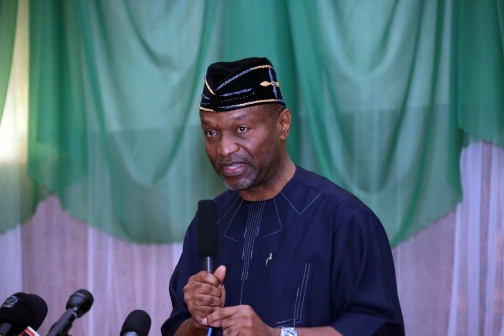 The Minister of Budget and National Planning, Senator Udoma Udo Udoma has said that success in producing a good 2017 Budget will require strong collaboration between the Executive and the National Assembly.

Senator Udoma who was speaking in Abuja on Monday at the The Gallery Colloquium organized by Orderpaper.com on ‘Budget as a critical tool for effective Executive-Legislative relations’, said to achieve the objective, there must be mutual understanding and ownership of national objectives and priorities by both arms of government.

Stressing that an important tool for achieving economic recovery and sustainable growth will be the 2017 Budget, Senator Udoma said it is important to always remember that both the Executive and the National Assembly will benefit politically from a budget that successfully turns the Nigerian economy around and brings prosperity to the people.
According to him, now that the country’s economy has entered a recession, stakeholders should all agree on prudent allocation of resources to key capital projects that will help to lift the economy out of recession and onto the path of sustainable growth. “All the key stakeholders must understand and appreciate the overall budgetary constraints as well as implications of some fiscal trade-offs,” he added.
He said the current economic situation in the country provides an opportunity like never before, for the two arms of government to set a template for succeeding governments on how national interest can be placed ahead of institutional contests.
While acknowledging that both the Executive and the Legislature have different roles in the budget production process, he nonetheless said the roles must not be seen as antagonistic but rather complementary. The National Assembly must not see itself as in competition with the Executive.
Explaining the budgetary process, the minister said the President, as the leader of the country, has the ultimate responsibility of delivering economic benefits to Nigerians in an all-inclusive manner based on his mandate or manifesto; therefore it is his responsibility to drive the process by setting out the framework of the Budget and all the heads of expenditure.
“It is also his role, as President, to articulate the national vision guiding the budget. And he must get each annual budget right because he has opportunity to produce only three more budgets before his tenure comes to an end”, he added.
The Minister said in processing and considering the Budget estimates therefore, the National Assembly should see themselves as working as partners with the President to achieve the national aspirations set out by the President.
“In doing so, the question of which arm of government is superior in budget formulation should not arise, as everyone’s objective must be the success of the government in bringing the dividends of democracy to the people”, indicated.
At this time in particular, according to him, the President needs the strong support of the Legislature to implement the tough decisions required to stimulate this economy and bring it to sustainable inclusive growth, not dependent on the vagaries of the oil price.
While maintaining that the two arms of government have a major role to play in bringing economic prosperity to the people, the Minister called attention to the fact that if the government fails, neither the Executive nor the National Assembly can completely escape the blame.
He however was confident that the members of the National Assembly appreciate the economic situation facing the country as a result of the failure over the last thirty years to successfully diversify the Nigerian economy from dependence on crude oil.
Government, he said, has a plan not just to get the economy out of recession but also back on the path of sustainable growth. The plan involves injecting a fiscal stimulus to provide funding for the 2016 Budget, which was carefully designed to reflate the economy but unfortunately has been affected by revenue shortfalls.
Thereafter, he indicated, “it is important to stay the course in implementing the major structural changes which had been outlined by the Government in our Strategic Implementation Plan (SIP). The spending priorities in the 2017 Budget will be guided by the objectives we set out in the SIP”.
The Speaker of the House of Representatives, Hon, Yakubu Dogara agreed that there was need for an effective collaboration between the Executive and the Legislature in the budgeting process to reduce the usual friction between them during the process of appropriation.
Honourable Dogara who was making some remarks on ‘Legislative perspectives on the budget process’ said a review of how annual budgets or Appropriation Bills have been prepared and executed in Nigeria since 1999 will reveal an unsatisfactory state of affairs, adding that there was an urgent need for Budget Reform in Nigeria.
He therefore suggested a review of the legal framework to ensure that the annual budget is submitted and passed on time before the commencement of the next financial years; a clear development plan with broad national consensus; extensive stakeholder consultation at the executive level during preparation of the budget; clear budgetary objectives and government targets to be achieved should be clearly spelt out; and there should be a robust pre-budget interface between the Executive and the Legislature to reduce areas of friction during the appropriation process, among others.
Signed:
Akpandem James
Media Adviser to the Hon. Minister