N1.1b Generated Revenue At Seme For Month of September 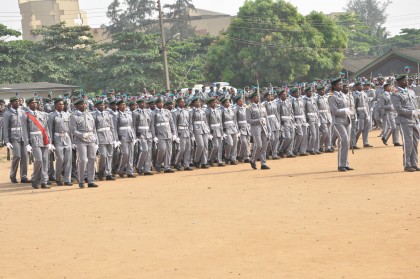 Taupyen Selchang, Seme: The Nigeria Customs Service, Seme Command has generated N1, 129, 115, 213.23 (One Billion One Hundred and Twenty Nine Million, One Hundred and Fifteen Thousand Two Hundred and Thirteen Naira Twenty Three Kobo), as revenue at Seme for the month of September 2016. The Command also made a total of 76 Seizures with Duty Paid Value (DPV) of N67, 729,225.18 for the period under review. The upsurge in the revenue figure for the period under review is said to be unprecedented in recent times.

Though the previous months were characterized by a lot of challenges that militated against the smooth collection of revenue in the Seme Command, it is heartwarming to note that efforts put in place to address the challenges yielded the expected result far above the preceding months. The amount generated surpassed the sum of N883, 791,678.88 that was collected within the same period under review in 2015 with over N245, 323, 534, 35.

Commenting on the revenue figure generated, the Custom Area Controller, Victor Dimka disclosed that the previous challenge of revenue in the Command has been overcome. He pointed out that there will be a boost in revenue if the Memorandum of Understanding signed with our counterpart (Republic of Benin) translates into handing over of all transit vehicles to Seme Command. He re-stated that with the compliance in the general unification of values across border Commands, the implementation of the complete 17 digits declaration of VIN and the strict adherence to clearance procedure of general goods, he was hopeful that this feat will be recorded and sustained once the principle of compliance, transparency and integrity while discharging the core mandates of the Service is strictly adhered to.

The Compt. Dimka pointed out that this impressive performance will go down memory lane to justify our commitment and determination to succeed at all course. He said the Seme Command remain undaunted and cannot be deterred in performing her statutory responsibility no matter the challenge.

In the same vein, the anti-smuggling unit of the Command has also intercepted and arrested three (3) bullet proof vehicles smuggled into the country at different entry locations.
The three arrested bullet proof vehicles with a Duty Paid Value (DPV) ofN58,797,969.00 have the following particulars:-
A black Jeep Escalade with Lagos Registration number GGE 225 BM.

Inspecting the seized bullet proof vehicles, the Customs Area Controller disclosed that the security of the nation remain a top priority to the border Commands of the Nigeria Customs Service.

The Command’s helmsman re-iterated that apart from generating revenue, suppression of smuggling and facilitation of legitimate trade, the Nigeria Customs Service has a complementary role of protecting the territorial integrity of this nation.

The Controller added that the challenge of security is vital to the survival of the nation’s socio-economic and political system; hence the need to ensure that bullet proof vehicles undergo security procedure for approval from the office of the National Security Adviser before importation.

He highlighted that the Command’s seizures in recent times attest to the alertness and the security consciousness of the anti-smuggling unit. He further stated that the Command located at the corridor of the West Africa sub-region will not relent in her effort in combating smuggling and other cross border vices.

Conversely, he noted that when smuggling is drastically reduced through aggressive anti-smuggling operations as in the case of Seme Command, legitimate trade across the frontier is facilitated and higher revenue generated.

The Customs Area Controller stressed that the uncompromised stand of the Command to work relentlessly in line with the global best practices (border management) and the policy thrust of the Comptroller General of Customs cannot be over-emphasized.

He charged his officers not to rest on their oars in having a healthy and symbiotic relationship with the stakeholders in the implementation process of the Federal Government fiscal policies. The Seme Command’s helmsman observed that a healthy relationship devoid of infractions in clearing procedure will give the Command the desired result, increase revenue generation and suppression of smuggling.