AfDB President: Nigeria Is Too Big To Fail 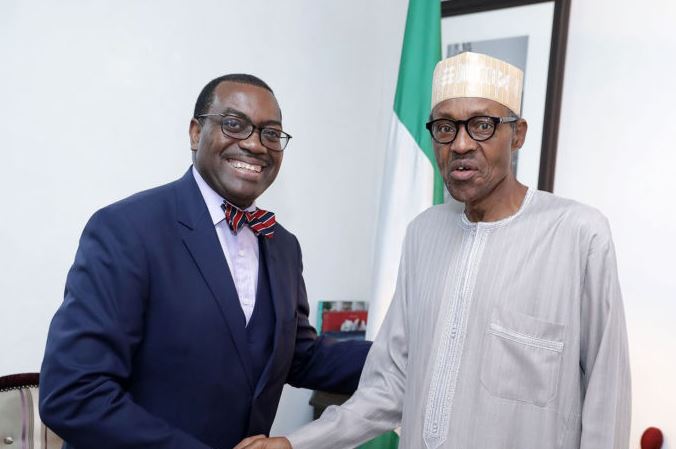 The African Development Bank (AfDB) has restated its commitment to supporting Nigeria’s socio-economic development aspirations saying the country is too big to fail.

President of the bank Dr. Akinwumi Adesina who said this in an audience with President Muhammadu Buhari explained that six hundred million dollars ($600,000000) has already been approved for Nigeria as the first tranche of its supportive gesture.

The Federal Government had earlier seek a One Billion dollar ($1 Billion) loan facility from the African Development Bank which the bank promised Nigeria.

The loan is in support for the 2016 budget deficits finance. The Minister for finance Mrs. Kemi Adeosun said the loan would be concessionary and carry an interest rate of 1.2 percent.

The loan is expected to cover the 35 percent shortfall in the 2016 budget.

The Minister of National Planning, Senator Udoma Udo Udoma, while in a meeting with the AfDB in October, gave an overview of the government’s plan to reflate the economy and spend out of the recession, the minister said that government is trying to contain the militancy in the Niger –Delta which has affected oil production in the country, hoping to restore production to 2.2 million barrels a day at the end of the year.

Ag. Director for Governance and Reform of the AfDB, Mr. Coulibaly, who lead the bank’s team in the meeting with the Minister in October said that the AFDB Team came to seek further clarification on policy reforms, level of budget implementation as it touches capital budget releases.

The African Development Bank Group (AfDB) is a multilateral development finance institution established to contribute to the economic development and social progress of African countries.

The AfDB’s mission is to fight poverty and improve living conditions on the continent through promoting the investment of public and private capital in projects and programs that are likely to contribute to the economic and social development of the region.