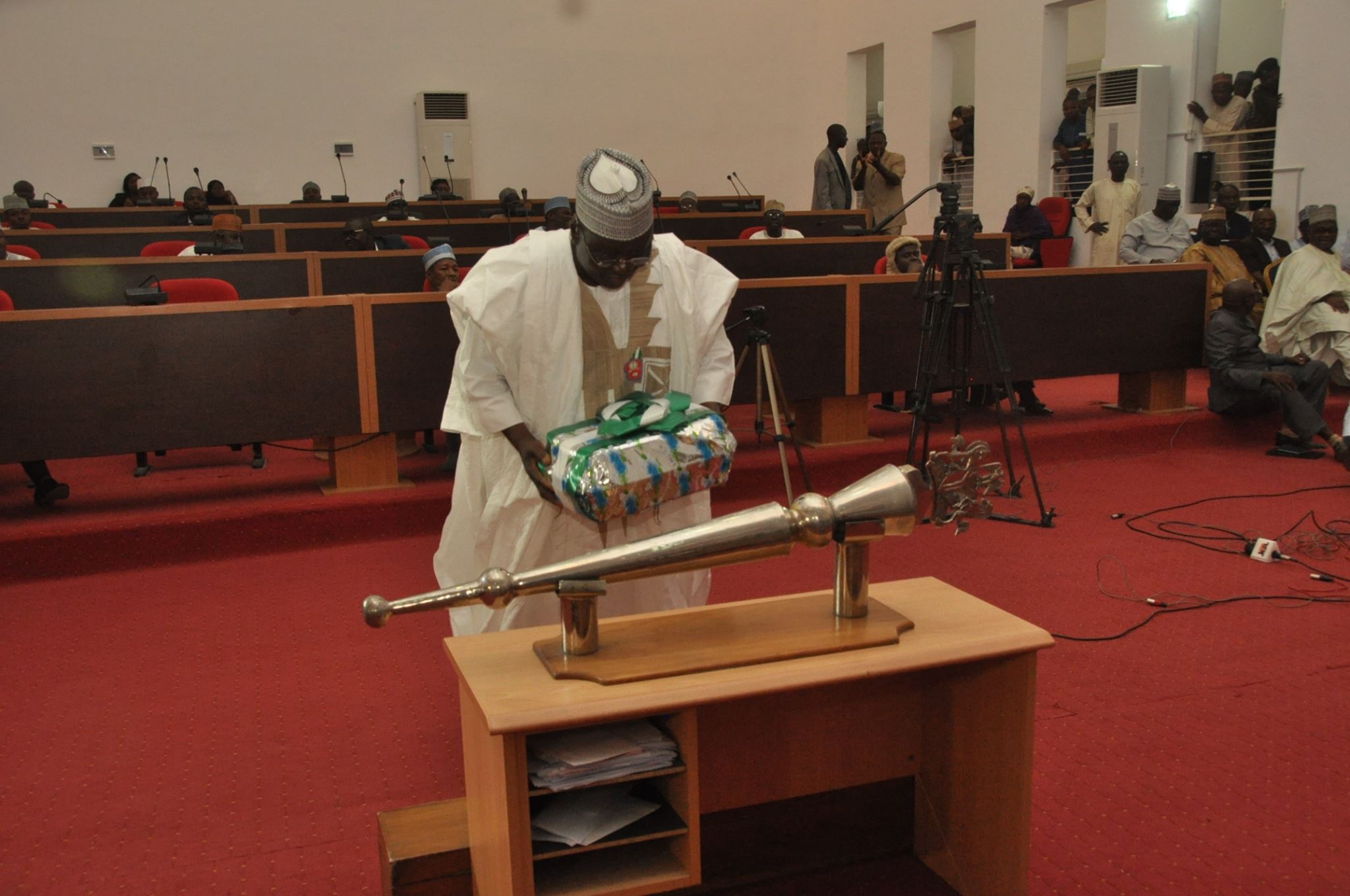 Full speech of His Excellency, Umaru Tanko Al-makura, Governor of Nasarawa State at the presentation of the 2017 budget, Fiscal Appropriation Bill to the Nasarawa State House of Assembly, Lafia.

Mr. Speaker, Honourable Members, it will be recalled that last year about this period, I stood before this hallowed chamber to appraise the performance of this Administration in line with our policy thrust focused on infrastructure development, provision of social amenities and other social services

For these past five years, therefore, this Administration has remained focused in the delivery of policies, programmes and projects that are critical to the socio-economic development of our people. In the journey so far, we have made modest efforts which are rooted in transparency and accountability. These virtues have been the driving force behind the successes so far recorded in our quest for a better Nasarawa State.

Mr. Speaker, Honourable Members, I wish to commend the commitment of this Honourable House in its efforts to sustain the sanctity of the partnership between the Executive and the Legislature. Indeed, your patriotic contributions have continued to add impetus to our collective resolve to provide exemplary leadership for our people. This is how it should be. It is hoped, therefore, that this partnership between the two arms of Government will wax stronger now given the difficulties the State and the Nation are facing due to economic challenges.

Mr. Speaker and Honourable Members, as you are aware, the current economic recession has continued to pervade the Nigerian economy. This has had adverse effects on the smooth implementation of government policies, programmes and projects, including the payment of salaries and statutory overheads. Similarly, the Internally Generated Revenue (IGR) of Government is also at its lowest ebb. The value of our currency has continued to depreciate against the dollar. This has significantly affected the socio-economic development of the country, including our dear State which can be seen in sporadic and incessant industrial imbroglio by workers all over the country. The government is working closely with Labour leadership both at State and National levels with a view to making the coming year stress-free by prioritizing expenditures in order to ensure workers’ salaries and welfare are fully enjoyed.

This unfortunate situation is further exacerbated by the continued dwindling of monthly Allocation from the Federation Account to the State as a result of the interplay of both macro and microeconomic and financial factors.

Notwithstanding this, our Administration is undaunted in our resolve to move Nasarawa State to greater heights. Accordingly, Government has remained focused in the execution of projects and programmes that have a direct bearing on the lives of our people. These include construction of roads, healthcare delivery, sports development, education, power, water supply, agriculture, markets development among others. Similarly, we have committed enormous resources to the welfare of the physically challenged, women and children, as well as other vulnerable groups in our society. This is in tandem with our policy of “All-inclusive Governance”. Accordingly, our administration has fully constructed a comprehensive special school in Lafia to cater for children of all categories of disabilities from kindergarten to senior secondary school levels. Similarly, the special schools in Keffi and Gudi to be completed and ready for use next year.

Honourable Members of the House, in line with the policy direction of this Administration, Government will put in place necessary mechanism in order to stimulate the economy. In this regard, we intend to provide support to the informal sector by enhancing the capacity of small, medium and large scale businesses, and also encourage intensive agricultural production, mining activities, commercial trading and cooperative initiative in our efforts to stimulate the economy.

Mr. Speaker, you may wish to note that in our concerted efforts to enhance the delivery of social services, this Administration declared a state of emergency on education and health sectors with remarkable successes especially with the rehabilitation of premier boarding schools in each of the 3 senatorial zones. More efforts is also put in place to ensure the fast-tracking to ensure the completion of specialist hospitals in Lafia, Akwanga, and Nasarawa. This is in addition to the full refurbishment of School of Health Keffi and the full completion of School of Nursing Lafia. In this connection, Government intends to sustain the existing school feeding programme in order to encourage massive school enrolment, retention and completion in consonance with our quest to provide education for all school-going children in Nasarawa State with emphasis on Girl-child education and encouragement of children with disabilities. Youth support programmes are also in place to engage our youth. This is the rationale behind the employment of 3,000 youth and the upgrade of the State stadium in Lafia to international standard. This will surely mitigate youth against restiveness and give them hope for a better future. Worthy of mention is the plight of people displaced as a result of conflicts. I commend the resilience and dignified ways our displaced citizens endure the challenges devoid of the complex and humiliation of IDP’s. The government has planned to quickly reconstruct all public facilities and support the rehabilitation of persons affected between now and the first quarter of 2017 in the areas most affected. Giving the proximity of the State to the federal Capital FCT, and the need to support federal Government and FCT, at the same time create an avenue for diversification of revenue generation, Government has declared the 13,000Ha Gurku-Kabusu land as planned area in order to provide alternative homes to Nigerians wishing to reside within that corridor. This is in line with our resolve since 2011 to make the Greater Karu corridor the ‘Maryland’ of Abuja. This will be complimented by the commissioning of Karu International Market early next year which will be the largest market in the whole of Northern Nigeria.

Mr. Speaker, Honourable Members, let me at this juncture present to you the 2017 Budget proposal. It is my hope that you will appreciate the justification for the allocations.
Review of the Year 2016 Budget

Mr. Speaker, Honourable Members, you would recall that in 2015, I presented to this Honourable House, a total Budget of Seventy-seven Billion, Nine Hundred and Seventeen Million, One Hundred and Twenty-six Thousand, Seven Hundred and Ninety-nine Naira (N77,917,126,799) only for the 2016 fiscal year.

Performance of the 2016 Budget

Mr. Speaker, Honourable Members, you would recall that the accruals under the 2016 Budget assumptions were premised, among other revenue sources, on Government determination to access the second tranche of the N10 Billion Bond from the capital market, N10 Billion Federal Government Infrastructure Development Loan, as well as N1 Billion Commercial Bank Loan. However, Government was able to access N16.1 Billion comprising Infrastructure Development Loan of N10 Billion and N6.1 Billion Budget Support Facility of the Federal Government, respectively.

In spite of the challenges in the accruals of revenue in 2016 fiscal year, this Administration made concerted efforts to continue with programmes and projects that meet the peoples’ aspiration. Worthy of note are the massive urban and rural roads construction, healthcare delivery, markets development, water and power supply, education and agriculture, among others. Some of these projects have been completed and commissioned during the year under review.
Fiscal Risk and State Government Financial Trend in 2016:
20. The Rt. Hon. Speaker, despite the measures put in place by this Administration to reduce recurrent spending during the current year to a reasonable level and increase investment on capital projects, they yielded little result as recurrent expenditure continued to grow and override capital expenditure.

In this wise, recurrent spending accounted for about thirty-one percent (31%) of Government total spending against twenty-three percent (23%) capital expenditure in the 2016 fiscal year.

This Administration was able to effectively manage our debt profile, keeping it at relatively moderate level. The government is, therefore, servicing only the first tranche of the Bonds collected in 2014, Federal Government infrastructure concessional loans, as well as some long-term outstanding Development Partners facilities. All of these have relatively low-interest rates with long time repayment periods.
The 2017 Fiscal Appropriation

The Rt. Hon. Speaker, Distinguished Members, let me remind you that Government has been consistent in using the new accounting standard known as International Public Sector Accounting Standard (IPSAS), which is in line with the international financial reporting and best practices. I wish to reiterate that this new accounting system improves accountability, transparency, and prudence in the management of Government resources.

Mr. Speaker, the focus of Government in the 2017 fiscal year is as follows:
i. Completion of projects that will turn the economic fortune of the citizenry, as well as stimulate the economy out of recession;
ii. Encouraging and supporting youth in agricultural production as a way of empowerment, boosting production, developing value chain and
strengthening commercial venture for a stable economy;
iii. Creating conducive environment for participation of informal sector in income generation and sustainable productivity;
iv. On security, the government is working closely with operatives to promote the protection of lives and property. This is yielding a positive result as
the State is enjoying unfettered peace which has improved our economic activities.

Mr. Speaker, Honourable Members, the current economic recession in which we find ourselves has continued to constrain our inflow. It is for this reason that Government decided to strengthen internal control mechanism in public financial management. Accordingly, Government intends to continue to strictly monitor activities of Ministries, Departments and Agencies (MDAs) in line with the fiscal expenditure framework of this Administration.
Parameters and Basic Assumptions of the 2017 Budget:

In drawing up the 2017 budget, Government is guided by the fluctuations in the Statutory Revenue Allocation (SRA) from the Federation Account which forms the major source of revenue to the State. We are also mindful of the poor performance of the IGR resulting from the recession facing the entire country.

The following, therefore, are our basic assumptions:
i. The government was unable to realize all the resources that our budget was based on in 2016. This, thus, informed our resolve to streamline the
2017 estimates along more realistic, pragmatic and achievable targets; and

ii. This Administration is determined to achieve economic growth through prudent management of resources and investment in areas that will cushion
the effects of the recession.

The budget framework shows a decrease of Thirteen Billion, Nine Hundred and Two Million, Seven Hundred and Ninety-seven Thousand, Seven Hundred and Eighty Naira (N 13,902,797,780) or 17.18% as against the 2016 appropriation. The details of these amounts are contained in the estimate’s document which I shall lay before you.

The Rt. Hon. Speaker, Honourable Members, in keeping faith with the commitment of this Administration to move the State to the next level, Government is equally committed to tackling the economic recession, the 2017 Appropriation is, therefore, christened “Budget of Reformation”.

Accordingly, the 2017 budget is to be funded from the following anticipated revenue sources:
A. Opening balance of N 6.42 Billion.
B. Federation Account

Mr. Speaker, Honourable Members, I am delighted to lay before you a total budget size of Sixty-seven Billion, Thirteen Million, Fifty-seven Thousand, Seven Hundred and Fifty-three Naira (N67,013,057,753) only for the 2017 fiscal year.
Sectoral Highlights

Mr. Speaker, the onus of moving out of this recession lies with all of us. The task ahead is, no doubt, herculean and challenging. However, in our collective determination, I am optimistic that we would weather the storm in order to give the people of Nasarawa State great hope.

On this note, Mr. Speaker, Honourable Members, it is my honour to lay before this Honourable House the 2017 Appropriation Bill tagged Budget of Recovery for your kind consideration and speedy passage.

I wish you all a blessed and prosperous new year.

Thank you and God bless.