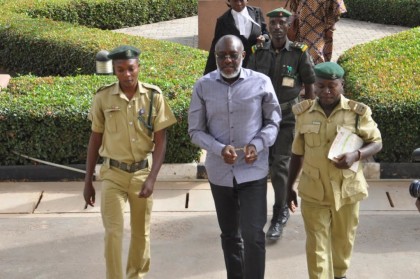 After his arrest on January 5, 2016 by the Economic and Financial Crimes Commission, EFCC, Metuh was arraigned on a 7-count charge for allegedly receiving N400million (four hundred million naira) from former National Security Adviser (NSA), Col Sambo Dasuki (rtd), who is also being tried for laundering $2.1 billion.

Consequently, he was admitted to bail on January 15, 2016 in the sum of N400,000,000 (Four hundred million naira) and two sureties in the sum of N200million naira each. Each of the sureties must have landed properties in Maitama, Abuja and must provide 3 years tax clearance. They must also submit affidavit, with 2 passports each, attesting that they have the wherewithal to pay the said sum in event of the defendant jumping bail.

Justice Abang, in giving consideration to Metuh’s application today, opined that the court is enjoined to remove any obstruction to ensure that, its orders are complied with.

“I therefore vary item 2 in the role order 19 as follows: the two sureties must be resident in Abuja and owners of landed properties in any district in Abuja”.

The Judge further upheld that, the certificate of occupancy of the properties to be tendered by the sureties must be verified by the prosecuting counsel.

Thereafter, the prosecution, represented by Sylvanus Tahir presented another witness who testified as PW4, in continuation of the trial.
Testifying, Eno Mfon Efiong, a staff of Diamond Bank Plc and an account officer to the defendant, identified the letters which were sent to the bank by the Commission, requesting the statement of account and other instruments pertaining to Destra Investment Limited.

The document, though objected to by the defence counsel Emeka Etiaba, SAN, was admitted as exhibit.
The matter has been adjourned to January 28, 2016 for continuation of trial.