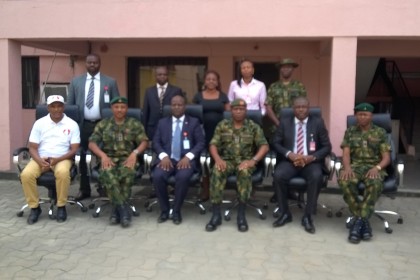 Harcourt, Rivers State, has said that the Economic and FinancialCrimes Commission, EFCC, remains pivotal in the military’s efforts tocheck oil theft and pipe-line vandalism in the country.He also pledged the army’s support to the EFCC in carrying out the oneroustask of sanitizing the oil industry.He gave the assurance during a courtesy visit to the EFCC’s zonaloffice in Port Harcourt on February 10, 2016.Noting that oil theft contributed to the sabotage of the Nigerianeconomy, he said, “I am aware that part of the mandates of the EFCC isto prosecute any person or group that is involved in any form ofeconomic sabotage.”He stated that the Nigerian Army would assist the EFCC in the area ofinformation gathering.“There should be a synergy of government agencies in Port Harcourt,particularly the South-south zone so that we can find a lastingsolution to the issue of oil theft, and tackle the issue ofvandalism,” he said.

On his part, the Zonal Head, Ishaq Salihu, appreciated the Brigade Commanderfor his kind words, and promises.“Your presence will go a long way in not only solidifying an alreadyexisting relationship between the EFCC and the Nigerian Army, but willgo a long way in the joint fight against oil theft/bunkering,” he said.

He added that the agency had hope and confidence in the Army topartner the agency in the fight against the menace of pipelinevandalism, oil theft and other economic and financial crimes.