How Suswam diverted Proceeds from Sales of Benue Shares – Witness

Aluyi Victor, Portfolio Manager of Elixir Investment Partners Limited, a brokerage firm, testifying at the on-going trial of a former governor of Benue State, Gabriel Suswam, and his Commissioner of Finance, Omadachi Okolobia, on March 2, 2016 told Justice A. R. Mohammed of the Federal High Court, Abuja, that the company was given oral instruction to sell shares belonging to the state. 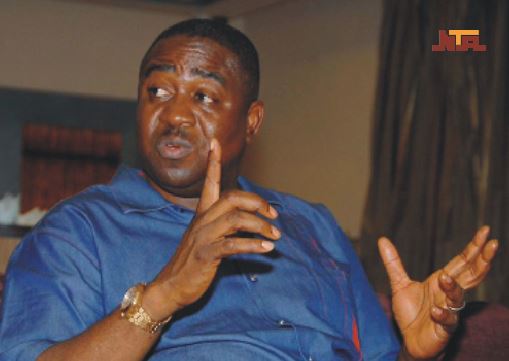 According to him, sales of the Benue State-owned shares yielded N9,411,078,000.61.
Led in evidence by the prosecuting counsel, Rotimi Jacobs, SAN, he told the court that sometime in January 2014, the company made a presentation to the state’s executive on the need “to consolidate its financial assets in order for it to be properly managed for optimal returns”.

He said, “Elixir got a verbal instruction from the former commissioner to consolidate the shares from various stock brokering houses, which was valued at about N25.5 billion and made up predominantly of Dangote Cement and Julius Berger shares.”

He told the court that the instruction from Okolobia was handed down to the managing director of the company ordering that the money made from the sales be paid into three different bank accounts. Based on the instruction a total of N1 billion was paid to Benue Investment and Property Company Limited, and N5.3 billion to Benue State Ministry of Finance.

He added that a third payment of N3,111,008,018.51 being part of the money made from the sale of the shares, was credited into the Zenith Bank account of Fanffash Resources, a bureau de change firm owned by Abubakar Umar.

A written instruction for the remittance of the proceeds from the sale of shares had already been presented before the court at a previous sitting, and admitted as evidence against the defendants.
He said, “At the point of making payment we however realised that there was no name of Fanffash Resources on the written instruction and we made the observation that the account does not belong to Benue State government or Benue State Ministry of Finance.”

He further noted that another 24 million shares of Dangote Cement was sold in order to mitigate the risk of a substantial drop in the value of the portfolio and a total of N3.7 billion was realised as they had gotten a written instruction to raise N10 billion for the state.

The letter for the instruction to raise N10 billion, and authority to sell block trade at the discount of 15 percent in the stock market were admitted as evidence. Also accepted as evidence were the certified true copies of the letter of instruction acknowledged by the bank, and forwarded to the company.

Justice Mohammed, thereafter, adjourned to March 22, 2016 for continuation of trial.