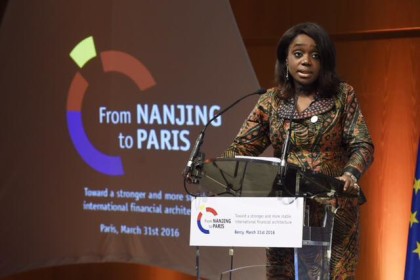 The Finance Ministers met to discuss current challenges to the international financial architecture and ways of combating macroeconomic volatility.

The high-level seminar also assessed volatility in capital flows and their impact on global economic conditions.

Speaking at the opening plenary session alongside Christine Lagarde, Managing Director of the IMF, François Villeroy de Galhau, Governor of the Banque de France, Valdis Dombrovkis, Vice President of the European Commission and Wolfgang Schauble, Minister of Finance, Germany, Minister Adeosun acknowledged the progress that has been made in the international financial architecture since the 2008 global financial crisis.

She noted that the first line of defence is sound macroeconomic policies, which Africa in general and Nigeria specifically, is trying to tackle with a series of fiscal housekeeping initiatives.

She highlighted the risks associated with international capital flows and warned that African economies need to be insulated from the disruptive effects of volatile short term portfolio flows.

Africa can build the necessary resilience, she said, but there must be more careful management of capital flows and a move towards long term and sustainable growth.

Minister Adeosun said that an essential component of more careful management of capital flows was to build better economic mapping and surveillance to manage risks and spill-overs, which she said should be a priority for G20 Finance Ministers.

She called for more understanding and flexibility for Africa to grow and protect key markets, as developed countries had done while at Africa’s current stage of development.

She highlighted the need for long term partnerships and foreign direct investment into African economies to deliver the necessary investment, particularly in infrastructure, to unlock sustainable growth.