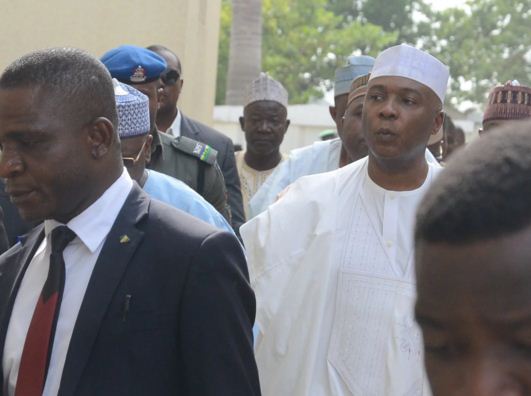 Economic and Financial Crimes Commission (EFCC) on Wednesday told the Code of Conduct Tribunal that the sum of 180,000 dollars was lodged into Sen. Bukola Saraki’s, account.

Mr Michael Wetcast, an Official of the EFCC said this at the CCT trial of the Senate President Saraki who is facing a 13-count charge bordering on allegations of false asset declaration and money laundering.

Saraki had earlier pleaded not guilty to the charges against him.

At the resumed hearing of the case, the EFCC witness, who was led in evidence by prosecution counsel Mr Rotimi Jacobs SAN, said the money was lodged by different individuals.

He also said that on Aug. 24, 2009, the sum of 99.975 000 US dollars was lodged into Saraki’s account which was later transferred to a Bureau de change company by name Bin Dahuuh.

The witness also said that Saraki authorised a bank draft of N256.3million in the name of the Committee on the Implementation of the Sales of Federal Government Landed Properties.

The tribunal admitted all the documents relating to the transactions into evidence.

The Chairman of the Tribunal, Justice Umar Danladi, adjourned the trial till April 18 for continuation.