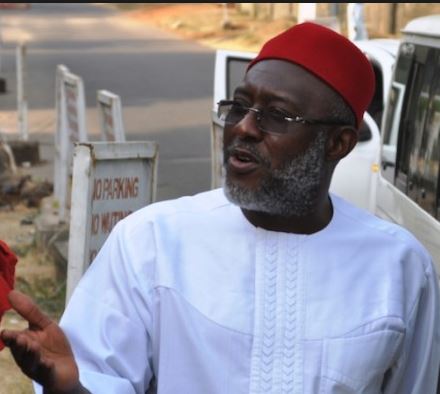 The National spokesperson of the Peoples Democratic Party, PDP, on Monday April 11, 2016, again attempted to throw another spanner in the wheel of justice at his ongoing trial before Justice E. O Abang of the Federal High Court sitting in Abuja on the seven count charge preferred against him by the Economic and Financial Crimes Commission, EFCC.

Metuh who is being prosecuted alongside his company, Destra Investments Limited for the alleged N400m fraud, had earlier on Friday April 8, 2016, met a brick wall in his attempt to stall his trial.

Metuh brought a new counsel Tochukwu Onwugbufor, SAN, to represent his company, Destra Investment Limited. The counsel, had through an application sought for an adjournment to enable him formalize his appearance as he needed to be properly briefed by the former counsel, Emeka Etiaba, SAN.

Justice Abang however dismissed the application saying it was “not deserving” and adjourned to April 11, 2016 for the defence to open their case.
At the resumed hearing today, the new counsel to the 2nd defendant (Destra Investment Limited), Onwugbufor, SAN, again renewed his application for adjournment to enable him go through the previous proceedings in order to prepare for defence.

“My application is based on the provisions of Section 36 (6) of the constitution of the Federal Republic of Nigeria which gives the defendant the right to fair hearing. My lord, we are incapacitated to continue with this trial unless we are given facilities and time to prepare for trial”, Onwugbufor argued.

Counsel to the 1st defendant, Emeka Etiaba, SAN, also aligned himself with Onwugbufor’s submission though he said the first defendant (Metuh) is ready with his witness to open his defence.

Responding, counsel to the EFCC, Sylvanus Tahir, prayed the court to discountenance Onwugbufor’s application, adding that the notice is not formal and that there is no difference between the instant application and the one that had been decided on Friday.
Justice Abang after listening to the submissions of both counsel ordered the 1st defendant to open his defence.

The defence witness (DW1), Ik Abugu, a media consultant in his testimony, told the court how he was contracted by Metuh to work with him to rebrand the PDP and the image of then President Goodluck Jonathan.

He further told the court that, he attended a meeting with Metuh at the presidential villa where he made a presentation on the strategies for the rebranding of the party and Metuh was asked by the president to supply his account details for payment.
Justice Abang thereafter adjourned to April 20, 2016 for further hearing.