I have carefully followed the news items making the rounds in relation to the budget presented to the National Assembly and what was defended by the Ministry of Transport before the Senate Committee on Land Transport which I have the privilege of chairing. 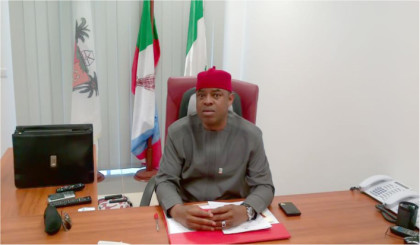 The focal points of controversy seem to be the Lagos to Calabar railway modernisation projects and the completion of the Idu – Kaduna rail line.

I confirm that the Lagos to Calabar rail line was not in the original document that was presented to the National Assembly by the Executive. However subsequently at the budget defense session before the Senate Committee on Land Transport, the Hon. Minister for Transport, Rotimi Amaechi, did inform the committee of the omission of the Lagos to Calabar rail modernisation project and indeed sent a supplementary copy of the ministry’s budget to the committee which contained the said project.

The minister noted that the amount needed for the counterpart funding for both the Lagos to Kano and Lagos to Calabar rail modernisation projects was in the sum of 120 Billion Naira, being 60 Billion Naira per project.

While the committee did not completely agree with all the changes made in the subsequent document, being fully aware of the critical importance of the rail sector to the development of our dear country, distinguished members of the Senate Committee on Land transport keyed into the laudable (Lagos to Calabar, rail modernisation) project and found ways of appropriating funds for the project without exceeding the envelope provided for the ministry.

In so doing, the committee observed that the Lagos to Kano rail rehabilitation project had been allocated the sum of N52 Billion Naira as against the sum of 60 billion which the Hon. Minister requested as counterpart funding while no allocation whatsoever was made for the Lagos to Calabar rail line.

With regard to the Idu to Kaduna rail completion, the Senate Committee on Land Transport did not interfere with what was provided for in the budget as sent by the executive, being approximately 18 Billion Naira hence I am equally surprised to read on the pages of the newspapers that the amount allocated to the said project was reduced by 8 Billion Naira.

While I would have preferred to wait till Tuesday 12th April, 2016 when the National Assembly reconvenes in order to have the benefit of viewing the details of the budget that was conveyed to the executive as passed, I am compelled to place the facts in proper perspective as it relates to the activities of the Senate Committee on Land Transport.

Without prejudice to the considerations and powers of the Senate Committee on Appropriations with regard to the appropriations process, the foregoing is the true reflection of what transpired at the committee level with respect to the Land Transport sector of the Ministry of Transport.