How Lamido, Son’s And Others Stole From Jigawa Purse – Witness 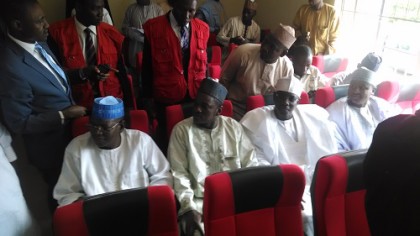 The Economic and Financial Crimes Commission, EFCC, on April 11, 2016, presented more witnesses in the on-going trial of former Governor of Jigawa State, Sule Lamido, his two sons, Aminu and Mustapha, and two others before Justice Adeniyi Ademola of the Federal High Court sitting in Maitama, Abuja.

They are being prosecuted on a 27-count charge bordering on the abuse of office and money laundering.

Prosecution witness, Micheal Wetkas, an operative of the EFCC, who testified as PW18, revealed how Lamido, his sons, and cohorts received kickbacks, while masquerading the same as proceeds for executed sub-contracts.
He told the court that investigations into the alleged fraud started in 2007 through to 2015.

“We discovered that Dantata and Sawoe Construction Company, which executed over 21 contracts totaling almost N30bn, had continuously paid over N1bn into the accounts of Speeds International Limited and Bamaina Holding Company – both accounts whose sole signatory is Alhaji Sule Lamido,” he said.

Dantata and Sawoe Construction Company, according to Wetkas, was one of the contractors to the state.

He said, “Investigations also revealed that about N100m of third party cheques were cleared into the Access Bank Account of Speeds International Limited, where the 3rd defendant (Mustapha Sule Lamido) is a signatory.

“A close inspection of Dantata and Sawoe’s electronic records, physical books, financial statements, consumable journals, and waybills by the investigators and the forensic team revealed discrepancies which could not be explained.

“In one of such cases, a forensic report revealed that entries dating back to between 2007 and 2013 were only entered into records in 2014-2015, long after EFCC investigations had commenced.

“Upon further questioning, the 9th defendant, one Mr Bartholomew could not provide any evidence that the company had procured any items to execute the sub-contract.

“As part of the investigation, the team of operatives discovered another company, A.G. Ferrero and Co. Limited, which was also a contractor to the state between 2007 and 2013, when the 1st defendant was the governor of Jigawa State. A.G. Ferrero was awarded contracts by the Jigawa State Government, one of which was the construction of the Jigawa State Secretariat, Dutse. The contract for the project was initially awarded for N6bn but later reviewed to over N9bn.”

Wetkas further told the court that one Interior Woodwork Limited was awarded contracts by the Jigawa State Government for interior furnishings, and consequently made payments of N65.5m and N48m into accounts of the 3rd and 6th defendants’ accounts, respectively.

He added that the 4th defendant, Aminu Wada Abubakar, had introduced one Alhaji Suraju Ahmadu, MD/CEO of Rauda Integrated Services Limited, who had previously testified as PW12, to the 3rd defendant, Mustapha Sule Lamido, under the guise that he (Aminu) was going to assist Ahmadu to secure contracts from the Jigawa State Goverment. Alhaji Ahmadu thereafter handed over his company profile documents for that purpose.

He said, “Alhaji Ahmadu subsequently got and executed two (2) contracts, valued at a sum of N62m. During the course of investigation, however, other contracts were discovered to have been executed by the duo of Mustapha Sule Lamido and Aminu Wada Abubakar, totally over N150m.

“We discovered an account in Access Bank in the name of Rauda Integrated Services Limited which had the 3rd and 4th defendants as signatories, into which part of the payments for these contracts, which had been executed without the knowledge of the owner of the company, had been paid.”

Another prosecution witness, Rasaq Adetuyi, a compliance officer at Access Bank Plc, who testified as PW17 had earlier presented to the court duly certified account statements of Dantata and Sawoe Construction Company which were admitted in evidence as Exhibit EFCC 58 (1-14).

Among other evidences tendered were: letters written to the Corporate Affairs Commission (CAC) to confirm the existence of the companies involved, which were admitted in evidence as Exhibit EFCC 59a, b, EFCC 60 and EFCC 61; as well as, the letter from CAC which stated that the company, Gada Construction Ltd, was non-existent, admitted as Exhibit EFCC 62.