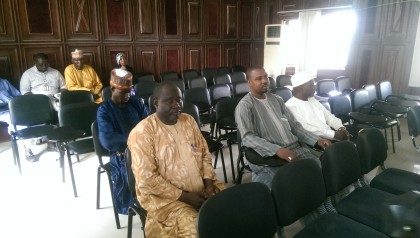 Sambo (aka Ardo Hamajam) and Kasim (aka Babagana Sale), were arraigned on an eight-count charge bordering on conspiracy, uttering of documents, and obtaining by false pretence, to the tune of N61 million. In one of the counts against them, between March 2009 and December 2009, they allegedly obtained N35,882,000 from the coffers of the UMTH under the false pretence that it was for supplies to the hospital and contractual salary for Babagana Saleh.

Musti and Sambo, were docked on a three-count charge bordering on obtaining by false pretence to the tune of over N58 million. They are alleged to have between March 2010 and June 2010, used their positions to defraud UMTH of the said sum in the guise that it was to be used for payment of salaries.

Kasim, was arraigned along with the duo of Musti and Sambo, on a three-count charge bordering on conspiracy and obtaining by false pretence to the tune of N8 million, between September 2008 and September 2010.

Gonimi (aka La’ari Wakil), was also arraigned separately along with Musti and Sambo on a two-count charge bordering on obtaining by false pretence and conspiracy to the tune of over N5 million. They were alleged to have between February 2010 and June 2011 fraudulently obtained the sum of N5,986,257.33 from the coffers of the teaching hospital in the guise that it was for payments of salaries.

Katangana, who was arraigned along with Musti and Sambo on a 15-count charge bordering on forgery, allegedly connived to prepare false documents to wit: UMTH payment voucher No. GTB/01/09 for January 2009 salaries, with intent that it be used and acted upon as genuine – an offence contrary to Section 465 of the Criminal Code Act, Cap. C38 Laws of the Federation of Nigeria 2004 and punishable under Section 467 of the same Act.

They all pleaded “not guilty” to the charges, when they were read to them.

Based on their plea, prosecution counsel, Abubakar Aliyu, asked for a date for trial to commence and urged the court to remand them in prison custody.
Subsequently, Justice Salihu, adjourned the trial of Sambo and Kasim; the duo of Musti and Sambo, and that of the trio of Kasim, Musti and Sambo to May 9 and 13, 2016 for hearing, ordering them to be remanded in prison custody, pending commencement of their trial.