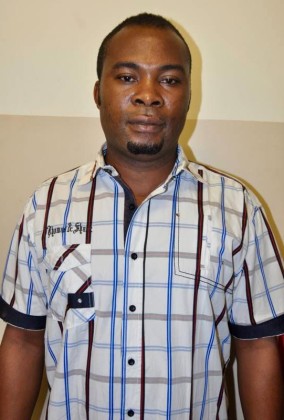 The Economic and Financial Crimes Commission, EFCC, on Thursday, April 14, 2016 arraigned one Robert Okorie before Justice O. O. Goodluck of the FCT High Court sitting in Maitama, Abuja on a four-count charge bordering on forgery and obtaining by false pretence.

Okorie was arrested and charged sequel to a petition from one Joy Chukwu Iregbu, alleging that she paid him (Okorie) the sum of N350,000 (three hundred and fifty thousand naira) to enable him obtain a Mexican visa for her brother (Iroegbu Friday Kingsley ). When he could not obtain the visa, the defendant promised to obtain a Malaysian visa for the victim.
Okorie later presented a Malaysian visa to the victim with which he travelled. On getting to Malaysia, he was arrested and deported for possessing a fake visa.

One of the counts reads:
“That you, Robert Okorie, on or about the 12th day of February 2015 within the jurisdiction of the High Court of the Federal Capital Territory obtained the sum of Three Hundred Thousand Naira (N350,000) from one Joy Chukwu Iroegbu under the false pretence of helping her secure a visa to Mexico on behalf of Iroegbu Friday Kingsley which you knew was false and thereby committed an offence contrary to Section 1(2) of the Advanced Fee Fraud and Other Fraud Related Offences Act 2006 and punishable under Section 1(3) of the same Act.”
The defendant pleaded not guilty when the charges were read to him.

In view of his plea, counsel to EFCC, Ijeabalum Diribe, urged the court to remand the defendant in custody and fix a date for trial.

Responding, the defence counsel, Yunus Abdusalam, presented a bail application before the court, urging the court to admit the defendant to bail.

Justice Goodluck adjourned to April 27, 2016 for hearing on the bail application and commencement of trial.
The defendant was remanded in EFCC custody.